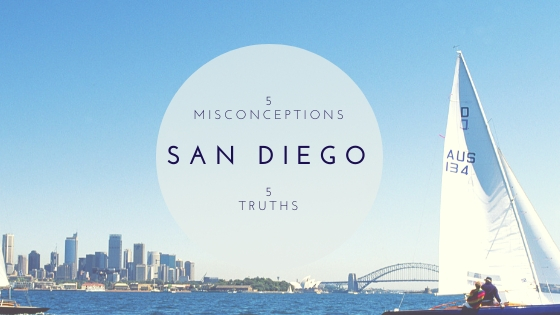 Everyone thinks life in San Diego, California is great. And there are many lovely qualities. But there are also some downsides many people don’t see if they have never lived there.

Misconceptions About Life In San Diego

Getting groceries isn’t a simple jaunt down the street. Its at least a 30 minute process. Getting in your car, driving with numerous lights and stop signs to then find parking. Once in the store you need to maneuver among the many people.

Commuting to work can be an hour or more due to the traffic. Usually its one person per car. Thats a lot of CO2 emissions.

2. Only Tourist Go to the Beach

Locals rarely go to the beach. The traffic is one reason. Most of those who call San Diego home are over 30 minute drive to a beach and once there, parking is hard to find due to limited spacing and the homeowners close have petitioned for private parking access. Most of those at the beach are tourists.

3. Most Stay Indoors with AC

On average, Life in San Diego is pretty warm all year round. Its more or less normal to have AC in October and May. Because the summer is so hot, many choose to remain indoors. While the winters are nicer, it is cold for San Diegans and many still choose to remain indoors. It is pretty common for young people to just hang out at the mall- plenty of seating to talk and AC.

Everyone has heard of snow days, but many have not considered fire days. It’s basically the same concept, except your school or neighborhood is in threat of being burnt down or the air quality is too bad to be outdoors. In the 80’s and 90’s Los Angeles had a big smog problem, not related to fires, but still bad air quality. Personally, I’d take a snow day over a fire one.

5. No Public Transport for Nightlife or Anything Else

There is limited to no transportation. There is a trolley, but it has select stops that don’t even cover most of what is called San Diego.

With this, many young people who would like to enjoy evenings out in downtown would have to be a sober driver or call an Uber/taxi, which can cost around $60 one way.

This also applies to baseball games or concerts or theater. You either drive or pay and sometimes you still need to pay to park.

Yes! On average there is nice weather all year round- by the coast or inland. No snow, barely any rain, and always sunny. Most schools are outdoors meaning students have to leave their classroom, go outside, to get to the next class. The eating area is all outside. There are outdoor pools. Some schools even have surfing as part of the physical ed course.

Often you hear about the drought, however, southern California and a good majority of the state in general, is a desert….the definition of a desert is lack of water.

For being outside the country of origin, the food is pretty darn good. Don’t talk to locals about any TexMex like Chiptole….it’s different.

California has been recently settled, basically when AC was invented. This was also the same time as travel by plane became more mainstreamed. This means that there’s an influx of immigrants from Europe, Asia, and Latin America. It is definitely very open and welcoming.

For those who do venture outdoors, there is a lot to do! You can drive a few hours and hit the ski slopes and in the same weekend go surfing. The next week you can hike some trails or ride dun-bikes in the desert. Choice is yours!

Because there is so much space, there is always parking outside the downtown area. Parking lots hold many cars. No need for parallel parking or one way streets! They don’t even test parallel parking in driving exams (most DMVs) .

This all being said, San Diego is a marvelous place to visit and I enjoyed growing up there, just it isn’t as glamorous as the movies make it out to be! If you are interested in touring around, check out this great article which details different San Diego things to do and see! As, a local, I have also written a post on some unique things to do in San Diego that are outside the box!