T and I got a bus to Siem Reap with Giant Ibis. The ride was comfortable and it provided Wifi, water, and a snack. It took 5 to 6 hours.

We got a tuk tuk from the bus stop to our hostel. I booked us at Funky Flashpacker Hostel because it was highly recommend. More on this later.

So, the main reason to go to Siem Reap is Angkor Wat. We heard about a sunrise tour with our hostel. The hostel is 10 USD for a van and guided tour at sunrise per person. However, we thought the guide wasn’t that great and later, a new friend just did sunrise on her own and I think it was a lot better.

Let me rewind a bit.

So our tuk tuk driver is named Koy. He was awesome. He asked if he could be our driver so we hired him for the days after the sunrise tour.

Here is our itinerary and prices:

Bought Angkor Wat ticket for 3 days at 62 USD (they check your ticket every possible time so keep it handy). As a side note, Angkor Wat is actually one temple and there are other temples within the compound as well as further out.

We watched the sunrise at Angkor Wat and with the guide we entered the temple then we went to Bayon then Ta Prohm (known as Tomb Raider temple).

I recommend doing: Sunrise at Angkor Wat, going to Ta Prohm to avoid the crowds, then going to Bayon (less of a crowd), then returning to Angkor Wat.

Even though Angkor Wat is the most known, it wasn’t my favorite at all.

So the compound of Angkor Wat is separated into smaller circle (the main 3 as mentioned above) and the larger circle.

The larger circle is less known and less crowded.

For the whole day of tuk tuk, we spent 15 USD in total.

We also watched the sunset at one temple. This isn’t highly recommended because to see the sunset you have to be on the temple, but the whole point is kind of like sunrise and capturing the temple and the sun. Plus it was cloudy and wasn’t a very good sunset. Anyways, you might as well do it because you are here, but don’t expect too much.

I ventured to the next temple with another Dutch friend, IS. The red temple, Senyai Bei,/Banteay Srei is an hour north of the city. We used the same tuk tuk driver.

Since the temple is far outside, the whole tuk tuk cost 25 USD.

We really liked this temple as it was less touristy and more enriched carvings.

A lot of the temples have cut up statues and defaced carvings as looters and scavengers pillaged it back in the day.

Actually, a lot of the temples even back thousands of years ago were changed either from Buddhism to Hindu or vice versa. You can see where it used to be Buddha or a Hindu god. It was quite interesting.

I definitely recommend doing the 3 day ticket, even my hostel was promoting one day, but I mean, if you go to Cambodia, you might as well spend as much time as possible there.

By no means, is Angkor Wat the only thing to see in Cambodia, but it’s the big one.

I had a lot of fun with T and IS. IS, specifically, was awesome! I spent about a week and a half with her. She also made my birthday in Siem Reap extremely special! Side note: Siem Reap is a party place if you want it to be and it is more lively than PP.

Some other things to do in Siem Reap:

-Go to the Royal Gardens (a park) and see the fruit bats hanging around.

-Check out Pub street for the different restaurants and bars.

-The night market near Pub street.

I hope you enjoy Siem Reap as much as I did. Definitely worth the trip :) 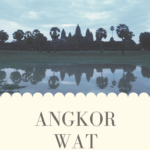 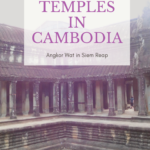 Page load link
We use cookies on our website to give you the most relevant experience by remembering your preferences and repeat visits. By clicking “Accept”, you consent to the use of ALL the cookies.
Do not sell my personal information.
Cookie SettingsAccept
Manage consent

This website uses cookies to improve your experience while you navigate through the website. Out of these, the cookies that are categorized as necessary are stored on your browser as they are essential for the working of basic functionalities of the website. We also use third-party cookies that help us analyze and understand how you use this website. These cookies will be stored in your browser only with your consent. You also have the option to opt-out of these cookies. But opting out of some of these cookies may affect your browsing experience.
Necessary Always Enabled
Necessary cookies are absolutely essential for the website to function properly. These cookies ensure basic functionalities and security features of the website, anonymously.
Functional
Functional cookies help to perform certain functionalities like sharing the content of the website on social media platforms, collect feedbacks, and other third-party features.
Performance
Performance cookies are used to understand and analyze the key performance indexes of the website which helps in delivering a better user experience for the visitors.
Analytics
Analytical cookies are used to understand how visitors interact with the website. These cookies help provide information on metrics the number of visitors, bounce rate, traffic source, etc.
Advertisement
Advertisement cookies are used to provide visitors with relevant ads and marketing campaigns. These cookies track visitors across websites and collect information to provide customized ads.
Others
Other uncategorized cookies are those that are being analyzed and have not been classified into a category as yet.
SAVE & ACCEPT
Go to Top