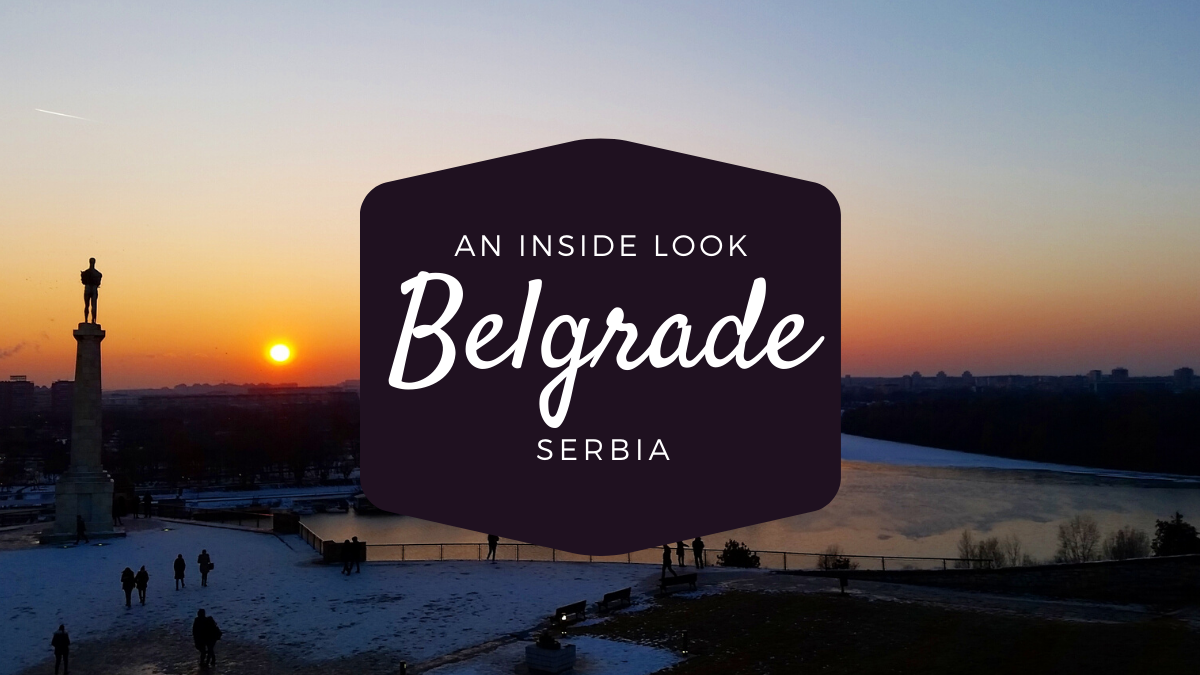 Belgrade is the capital of Serbia. Which, isn’t as well known as some might think. Coming from the United States, my geography and history of this part of Europe was very very limited. Even when I went, a lot of my American friends were confusing Serbia with Syria and Siberia. All very completely different places.

As an overview, Serbia is located a few countries above Greece. It is just south of Hungary. Some Serbs consider it to be in Southern Europe, which it is indeed in the southern part of the continent; however, I think the other countries that claim that title would disagree. From my personal perspective- it snows too much in Serbia to be considered “southern.”

Belgrade is now the capital of Serbia, but it wasn’t too long ago, back before the 90’s, that it was the capital of Yugoslavia. Yugoslavia was a country when the Berlin wall was still around. It comprised of countries that are now Croatia, Bosnia and Herzegovina, Montenegro, Macedonia, Slovenia, and Kosovo. Though Serbia and Kosovo are still fighting about if Kosovo is its own country.

When the wall fell, so did Yugoslavia and the countries had a huge war among themselves because each wanted to be its own country; however, Serbia didn’t really want to give up so much land. The war was devastating to many families and to this day you can see the remnants of what happened.

In regards to the language, as it used to be one country and even before Yugoslavia there was a lot of cross over, the language is more or less the same. However, to establish a sense of national identity, each country says they speak their own language. Croatia- Croatian, Montenegro- Montenegrin, Serbia- Serbian.

Macedonia apparently has a bit of a different language.

According to my friends in the Balkans, there is still some distaste of Serbs, but as the newer and more peaceful generations are becoming stronger, this is dwindling.

The Serbian currency is Serbian dinar and there is even a bank you can get fake money with your face on it, which is fun!

At the end of the day, I had a marvelous time in Serbia and I look forward to giving you some further tips. In fact, Belgrade is in my top 5 cities!

There are so many things to do in Belgrade which are highlighted in this post(Belgrade: A complete guide), but to give a short synopsis here are 5! If you are looking for more and more information in general, be sure to keep reading on.

This museum is held outside of the city center so one will need to catch a bus to go out there. It gives great information in regards to Yugoslavia and everything Serbia has been through in recent years. For me, it was very useful for understanding the culture and getting a better appreciation of what was around me.

This fortress is in the heart of old Belgrade. It looks over where the river converges and in the summer people enjoy the grass areas and the views. At sunset, people sit along the edges enjoying with friends and drink. In the winter, it is still beautiful and worth walking around in the sun.

When there was the Austrian-Hungarian empire, they owned half of Belgrade. This section looks more like Western Europe than the rest of the city, which is pretty cool to see such a contrast. One crosses the river and its a nice day walking trip from Belgrade center.

Nikola was actually born in Serbia when Serbia was part of the Austrian-Hungarian empire. Though his major inventions happened when he was in the United States, the Serbs have a museum dedicated to him and all his inventions. So, if you are looking for science as well as history, this is the spot for you!

There are two must see churches: St. Mark’s and St. Sava. These are beautiful examples of Eastern Orthodox Churches and will definitely make you feel small since they are so big! They are places of worship so though tourism is allowed, one needs to be respectful. It is quite close to old Belgrade that it can be part of your walking around adventure.

For sure, one of the must things to do are kafanas, which are mainly held on Skadarska street (in the Bohemian quarter with all the bars and restaurants). Serbians love it and foreigners too. A kafana is basically a party- a group of people gathered to eat, drink, dance, in general, have a good time.

The name is a bit hard to remember, but basically it translated to, well, what you think of with a big sausage and cheese coming out. The name is sexual in nature, true, but it really is delicious especially if you like meat and cheese! Essentially it was like a hot dog, but it was their traditional sausage (Cevapcici), but quite large. My friend introduced it to me from a hole in the wall food vendor. Literally, the vendor sold from this little booth on the side of the building.

This pastry, one can call it, can be filled with anything! The outside is a pastry crust thing (think croissant) and it is wrapped usually in a spiral. There are some frozen in the grocery store near the pizza section if you are curious! The inside can be meat, cheese, veggies, or even some type of sweet thing. You can get this at any bakery in Serbia, which of course are better than frozen, and usually one was enough for lunch or dinner! It is a bit greasy though, be warned.

This is the traditional sausage. There is no further explanation than that. It is delicious, for those who are meat eaters and definitely worth trying. It is quite different than the sausage we have available in North America or Western Europe. Cevapcici is actually little sausage. Other countries call it Cevapi. The cici is the “small.”

This is the local traditional drink of the area, Serbia calls it this, the other countries have their own names. Locals will swear that it can cure anything. It is clear in color and reminds me of vodka, but stronger. My first taste was on a walking tour and the guide gave some out at the end. But any bar will have it. You can take it as a shot or sip on it.

Nis is one of Serbia’s bigger towns in the South near the border of Bulgaria. It gives visitors a closer insight into what regular Serbian life is because it doesn’t get that many tourists in comparison to Belgrade. There is an old transit Holocaust concentration camp near the city, which is worth the visit to get more historical information.

Novi Sad is a day trip from Belgrade. One of the big highlights is another fortress that is known for having concerts in the summer. People have to be careful though because it is connected to caves underground and there have been cases of people getting lost in those tunnels. Besides this, the city itself is beautiful and worth walking around to see the different streets and the different building styles.

This town isn’t in Serbia, but many people head over from Belgrade. This Romanian town is quite beautiful and during the Cold War, they were so close to the border that they could receive news from the Serbia radio frequencies. This was important because Yugoslavia was a bit more open to news from the West, but Romania didn’t allow it. And it was from here that Romania had their revolution against communism.

The biggest Instagram spot is at the Fortress at sunset. Climb to where you are somewhat looking down at the statue of the soldier and towards to two rivers connecting. The sunsets right there and its amazing! You won’t even need a filter.

The second Instagram spot I would recommend is in the old Austrian part of Belgrade. If you go up the hill where there is an old church, you will find a view of the city and the river. Again, at sunset is another beautiful time to go because of all the colors!

The religion in the Balkans is pretty mixed. In Croatia, there are a lot of Catholic/Western Christians because of the Roman influence. In Bosnia and Herzegovina, there are a lot of Muslims. In Serbia, there are a lot of Eastern Orthodox Christians. There are, of course, other religious sects in the different countries, but even though they were one country for many years and have been mingling among each other for hundreds of years, there is quite a divide in religion from one country to the next. Therefore, when I was traveling around the Balkans, I got to see more cultural differences between my own culture and the country next door. Which is is harder than one would think in Europe.