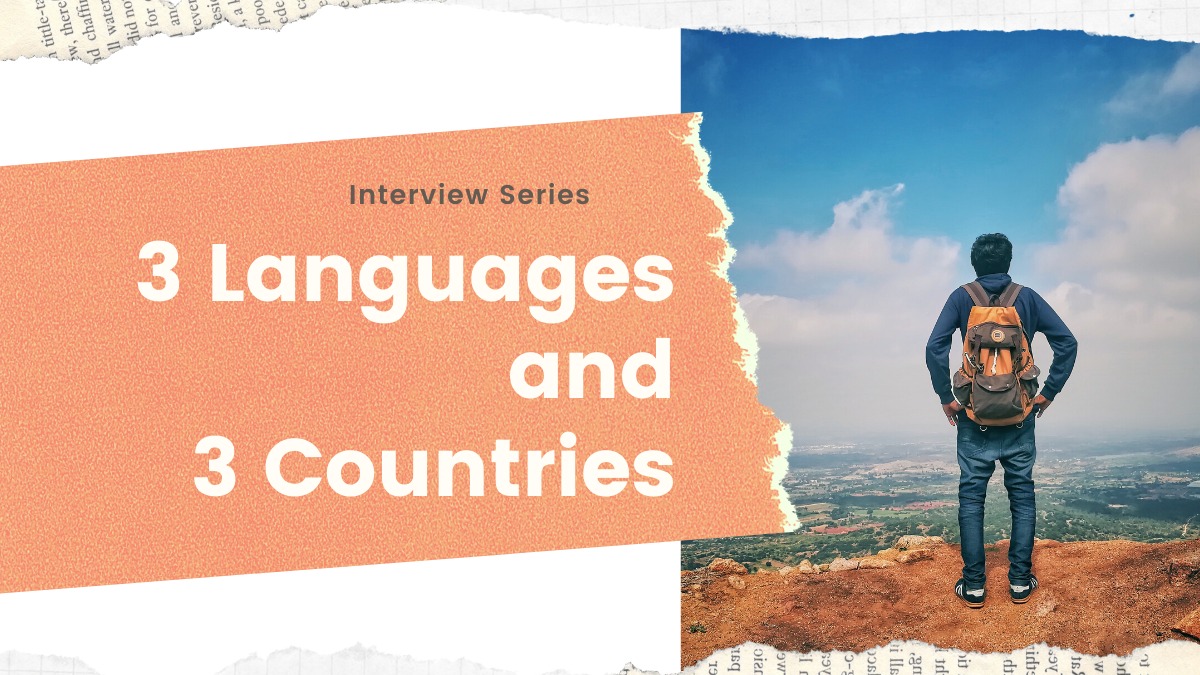 3 Countries Away From Home

I had the pleasure of interviewing a friend of mine who is multilingual and has led an interesting international life and how he was able to master three languages in such a short time span!

Originally from France, my friend has been able to live extended periods of time in the United States, Canada, and Mexico.

He got to see different cultures and get fluent in two more languages in addition to his native French.

He brings up a common point for language learners that when they arrive in a place that speaks that language fluently, the language they have learned in school was not sufficient enough.

He believed his English was good, but until he arrived in Louisiana did he realize he couldn’t understand anything. In his defense, the Southern accent is a bit difficult and he had quite a Southern roommate for his study abroad experience.

He was near New Orleans, but far enough that he still got to experience campus life and small town life in Louisiana due to living there for a year.

He said that after 3 months he saw a big improvement in English and after 6 months he became comfortable and saw less improvement. Meaning, he still improved, but not as big of a jump.

At first, he didn’t want to go to Louisiana. The big reason he picked it was: Finances. It was the cheaper option out of all the others and what made his decision more solidified was that Louisiana’s program offered a year long program rather than just one semester.

Now, he is so grateful to have experienced it because he truly loves the culture, people, and environment.

After spending a year in Louisiana, he wanted to return to the United States and had experienced a very depressed year in France. Basically, he had a very strong culture shock when he returned home.

He was looking for options to return to the United States when a cousin of him recommended him to look at Disney World. This cousin worked in Paris’ Disney and recommended him for the job.

He got the job and had to go through some interviews to test his English language. He was able to get a customer service job, meaning talking with customers as they go about the park.

Due to this, he was able to practice his multilingual skills English and Spanish, but also there were some French speakers- specifically from Quebec.

He does recognize that not using English for a year made him digress a little in level, but after a little bit, he got his level back. However, he was a bit nervous at the beginning when dealing with customers because he didn’t want to offend anyone, but everything turned out fine!

He did know he wanted to head to Quebec later and so it was still interesting to see how many Quebecois were in Florida. Now, after living in Quebec, it makes sense (people escaping the snow).

Being with all the other international students who were part of this program was a big enjoyment for him. They all lived in this Disney campus, but he does mention that Disney had strict rules and some were kicked out of the program for bad behavior.

When he wasn’t working, he traveled a bit around the state and met up with a French friend in Miami and even attended his wedding a few years later (in Miami).

For Spanish, he had some in school and had many Mexican friends so he was better in Spanish language before Mexico than he was in English before Louisiana.

He does mention that Spanish is more comfortable for him and comes more naturally since his native language is French and they are similar. However, he believes English is easier for him because he practices it more.

Since he already has had a study abroad experience he believes it helped him with adapting and going to Mexico. He also had a few friends who were from Guadalajara and he thought he didn’t experience a big culture shock like he did when he was in Louisiana.

He applied to a few grad universities in Quebec province, but didn’t know where specifically he wanted to be. Eventually, he got accepted University of Laval, which is based in Quebec City.

Due to the number of jobs available in Montreal versus Quebec City, he decided to move even though he loved Quebec City.

His originally plan was to move to the United States to work, but due to a past relationship, he decided to compromise and stay in Montreal.

He ended up traveling back and forth from Montreal to Quebec City during this relationship and recommends using car sharing programs to cut down costs as buses are more expensive. However, buses could be more comfortable for some due to Wifi and being able to sleep and not feeling pressured to talk to those in the car share.

He says the biggest difference between Quebecois French and French French is simply the accent. This does affect written French because they pronounce things so differently it is hard to see how that word is written.

It is hard for some French speakers to understand Quebecois. Which makes me (a French learner) feel better!

Though Quebec gives France problems for using English words, Quebec also uses English words and sometimes they don’t even know the French word equivalent or sentence. Often the French use technology words with French accent like Wifi while Quebec uses straight up English words with an English accent.

As a French native (from France) he finds this interesting and annoying (the fact that Quebec gives France problems).

Though Quebec City is known for its European architecture and vibe, he doesn’t believe it is so European. He says for North America, it is more European, and is very beautiful, but it isn’t actually European.

During the interview, he outlined the differences between the different countries he has lived in. He says in the States it is more logical and conceptual rather in France it is pure memorization.

This made the States easier for him because it is more understanding the idea rather than memorizing the exact words.

France, he found, requires students to have more classes per semester and so in Louisiana, he had more time to focus on one or two classes or had more free time to explore.

He did say that Americans tend to give more Multiple Choice exams rather than France, which is more writing based.

It was hard for him to really compare these experiences with Quebec because Quebec was grad school. He did say that it was more self-teaching and a TA (teacher assistant) or guest speakers from the business world discussing the lectures.

He is not sure if he would recommend it to others, but since it was grad school, it is hard to say for sure.

My question was if he noticed any stereotypes in a positive or negative way towards French people as well as stereotypes he noticed about Americans, Mexicans, and Canadians.

He said for him, the biggest thing he does while traveling is trying to blend in. He knows it is not as easy as it sounds, but he does his best not to stand out. Especially in dress.

However, in terms of cultural differences, he does say North Americans are more outgoing than Europeans. Europeans tend to be more quiet.

As a European, he was expecting more fat people in America, but he didn’t see as many as he thought he would have. He did say how nice and welcoming people were in Louisiana and Mexico.

However, he found people in Quebec are not as open as Americans because of their European ancestry/culture.

I asked him what his advice was for anyone or French people looking to live in those places he has been to.

One, for Montreal, in regards to cars and driving, is to make sure you understand the parking rules because it can be annoying and one can gather a lot of parking tickets!

Just like in America, one needs a car to explore the countryside in Canada/Montreal as well. Though public transportation system in Montreal is great, going outside isn’t that convenient.

As a side note: in Montreal, as a multiilingual city, it is very easy to hide in your French bubble. You don’t need to learn English language. He was struggling to practice his English.

The other point works for anyone and everywhere- just be open. And hang out with different cultures and peoples to experience everything. I also mention my own Argentine study abroad experience near the end of the audio!

For French people particularly living in Quebec- realize that just because they speak French doesn’t mean that Quebec is another France. He does say it is up to the person to figure out what this means to them.