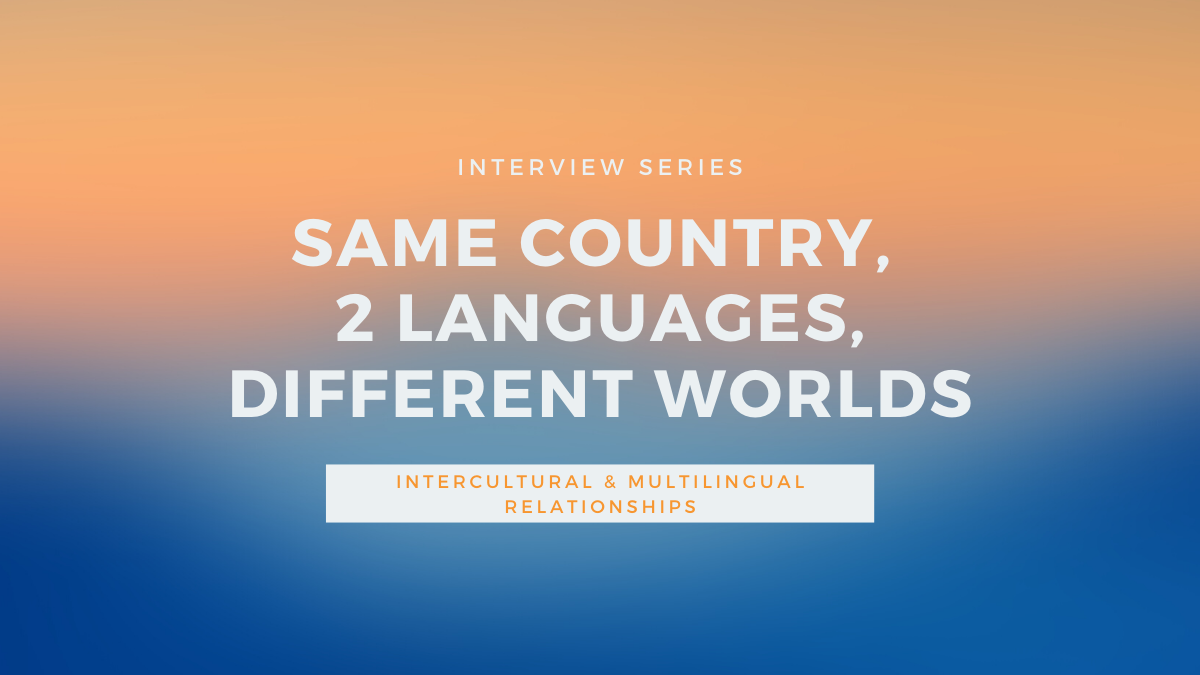 My next contributor gave me a lot to write! Because she did such a beautiful job answering my questions, I will let her words do the talking by giving it to you in Q&A format! I hope you enjoy!

Where did you meet your significant other?

If you met in person, was it in a different cultural place than what you are used to?

I am from 6 hours away from where I decided to go to school, I wouldn’t say the culture was different per say however I grew up in a community with a large Italian population and the area where I went to school doesn’t have one. I spoke Italian at home as a kid where as my boyfriend only spoke English. There were no differences regarding steps, just interests

Where are you both from?

Both of us are from Ontario, Canada

His: English. Mine: Italian and English

He only speaks English.

Has this extra language helped in communication while intercultural dating?

The extra language has made it difficult at times because when I get frustrated I speak Italian or sometimes I don’t know the English word for a thing.

If you have kids, or want to have kids, how will you manage having different native languages in the house?

We have thought about having kids. The kids would learn Italian at Italian school and I would speak Italian to them. He has offered to learn Italian lullaby’s, alphabet, key words and phrases. The children will watch italian tv and cartoons. My parents will speak Italian to the children. He is slovanian and we have discussed him becoming more connected to the culture so going to language school, dance groups, and festivals will be a big part in raising children

Can you describe your relationship?

He is open to my culture and loves to learn and participate in my families traditions, food, songs and visiting my family in Italy. His family his hesitant about my culture (the mothers side) and although open, they often judge habits, traditions, the importance of language and beliefs. The father speaks slovanian so he is very encouraging and open to my culture and language. Our relationship is healthy and we learn from eachother everyday

What cultural differences have you seen?

There is a lot, for example family is a big part of my life as we see each other almost every weekend and it is a large family with young children. My extended family is a big part of my support system and I know it was a culture shock for him to be surrounded but so much new foods and a lot of people in one house. For me, learning quite was something hard, his family don’t talk while they eat cause it’s rude (very different from my family), the sense of humour is very different from mine and my culture. Small things like what we watched and liked as kids, the foods we like (however he loves Italian food now).

He identifies as a Canadian and grew up skating and skiing, where although I was born in Canada my community was mostly Italian and my parents never taught me how to skate, we didn’t care for hockey and I preferred soccer, I volunteered at festivals and parades. He doesn’t understand the sense of community in a diaspora and the importance of that in my life but he is learning. At times I am defensive about his culture because I feel like his family judges me on mine so I become less open minded to his and closed off.

What have you done to work through those differences?

I have been patient to help explain my culture and the importance it has in my life, but realized that showing rather than explaining its importance to me is the key. I have exposed him to the music I grew up listening to, the movies, the TV shows and a few of the books I read. He has started to understand a lot of the inside jokes of the culture. He also understands the importance of the elders, and he can sort of understand my grandparents when they speak due to language exposure. We encourage each other to ask questions of things that we don’t understand. And to not become frustrated if the other person does not understand right away. I have learned that his family is not judging me or my culture but that it’s a learning curve for them. I am the only person in their family that speaks a non-Canadian language (French or English), And I am empathetic to the fact that my personality is very different to all of theirs and they feel pressure to be understanding of my beliefs and culture. This lens has helped me not take things so personally and open up communication.

Doing small things with his family like showing them the recipes that I cook, The traditions that we do during holidays and sharing that with them has made a tremendous improvement to our relationship. Lastly, the key is to laugh. What I mean by that is my culture is not perfect and we do some odd things. So it’s OK to laugh at yourself, and he does the same for his. We have a term for Canadian people it’s called mangiacake (the term was invented as a slur as at the time many Canadian referred to Italians with derogatory terms). My boyfriend has taken that name and calls himself fun families favourite mangiacake. Not giving derogatory terms the power to define you but rather you re-defining it has also helped break down barriers in my family’s prejudice against the belief that an outsider Is trying to take away my culture from me

If you live together, where do you live?

We have thought about moving to different places but we both decided we would stay in Canada.

If you live in a place that isn’t your home country, how was the visa process/how did you manage to move there?

Well I am an Italian citizen as well and he is on his way to getting citizenship in Slovenia. This would enable us to both be EU citizens.

When in your dating time frame did you move in together?

We are not living together.

If you are married…

We are not married.

Although not married we have discussed this and he wants a big Italian wedding just like me. Although he knows my family is bigger than his, he is accepting of a large wedding and the food being Italian. We have both agreed that in both of our cultures both Italian and Slovenian getting married in a church is very important. He is also recognized that having some form of Italian music and classic songs are important to me and my family. I recognize that his family is less formal/traditions however he wants a tradition wedding and does not care about his families differing opinion.

We have talked about how language will come in to play at the wedding. For example there will be family who speak only Italian or his first language is Italian. So, my speech will be most likely in both Italian and English. It’s also customary in Italian weddings to let pigeons or does go outside of the church. That is a tradition that he is very interested in as well. I have discussed Wanting my wedding at a vineyard and wine plays a large part as well. He also really enjoys that idea as we share a lot of the same interest in food and alcohol. At first I don’t think he quite understood how music is an important part of Italian culture. But after explaining to him that music for a long time was all that some Italians hat during the war and post War and dad has impacted the modern day culture today. He began to see that Italian music as an important part of getting married.

If you are in a long distance relationship- where do you both live?

We are long distance for 4 months out of the year and we live 5 hours away from each other.

My biggest step would be for both parties to keep an open mind and be willing to learn. The reason why you love that person or start to develop feelings for that person is because their culture is connected to them in someway which means you’ll probably fall in love with the culture as well. This relationship has taught me a lot about not taking my culture for granted, my family encouraged Italian language and encouraged me to keep the culture going but the same can’t be said for my boyfriends family. His family moved from Slovenia to Canada around the same time

My grandparents and parents moved from Italy to Canada, However they didn’t encourage the culture but rather in a simulation. This experience I know has taught my boyfriend to look into his culture and reconnect with it and it has also let me learn about a new culture as well. The other thing is don’t take things too personally, if the family is not accepting of you right away Or your family is hesitant just know that it takes time and let your partner know that as well. Although intercultural or enter language dating can be at times more difficult than dating someone with in your culture it is by far more rewarding and you grow much more in my opinion

Absolutely! You cannot have culture without language or language without culture. Music is tied to language but it’s also intertwined with culture. Every day habits and phrases Were is shaped by culture and language

Have you had other relationships that had cultural or language differences? Anything to add in regards to them? (Can be non-romantic too)

I have been friends with people from different cultures, most of my friends are not inherently Canadian actually but Greek, Polish, Ukrainian, Russian, Pakistani, Arab, Armenian, and Azerbaidzhan. My boyfriend is one of the only Canadians that I am really close to.

Be sure to connect with me on social and or sign up for my monthly newsletter!