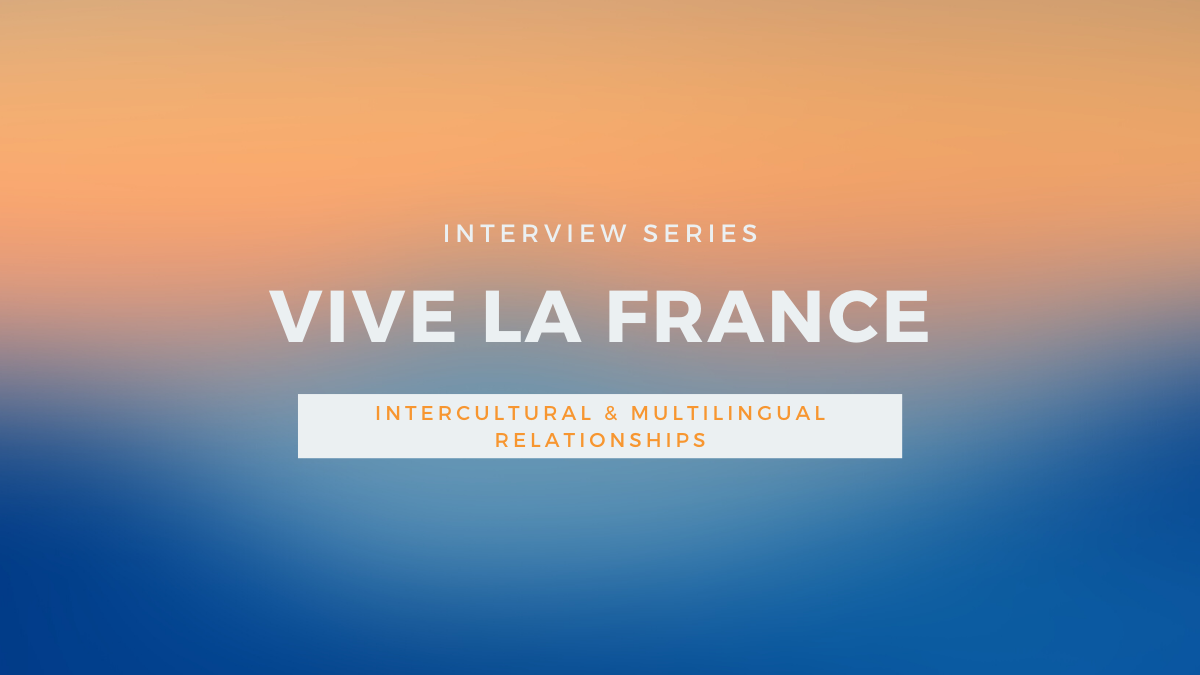 I am very interested in intercultural relationships and dating between people with different native languages. I created a questionnaire and asked people to fill it out. Much to my surprise there wasn’t a lot of responses. There was a lot, but not what I was thinking. I was thinking it would be a lot more and I suppose this means that this type of dating isn’t as common as I thought.

Here is one of my Intercultural Dating Stories Series, which consists of one partner being from France.

My next guest who filled out the questionnaire originally comes from New York and her partner comes from France. They originally met at a rooftop university party in Israel and have been together since.

In general, their dating steps were similar, but in the American way, she didn’t assume anything until they had a discussion about being exclusive. He, on the other hand, did assume they were exclusive from the beginning. She writes that “casual dating/talking wasn’t a common concept to him.”

I would also have to agree that French dating culture is more in this line of thought, as I have also experienced this myself dating French guys.

Anyways, not only is their common language English, but both speak Hebrew as well. She writes that his Hebrew is at a much higher level so they mainly talk in English, but she would like to work on her French to a fluent level in order that when they do have kids they can speak to them in French and Hebrew as English would be taught in schools. She also speaks Spanish, but didn’t put too much emphasis on how that plays a role in their relationship or for future kids.

In terms of describing her intercultural relationship: “He’s my other half. From the moment I met him I just knew he was the “thing” that was missing in my life. We really do complete each other as cheesy as that sounds but he’s my best friend and I can’t imagine a day without him.”

She offers an interesting tidbit about cultural differences. His family also live in Israel now and they spend a lot of time with them. She says it is a bit hard sometimes the constant switching between French, Hebrew, and English. She does mention that she has been exposed to many new foods.

For specific differences, she mentions that sometimes there is miscommunication when they are referring to pop culture from when they grew up like TV shows, movies, music, etc. This is when they have to explain things and give background information. However, she finds the positive in it because she gets to rewatch old favorites of hers while showing him, for example, Spongebob!

For the long term, they foresee themselves moving and settling in the United States. However, she mentions that his French family and him had an easier time moving to Israel from a foreign passport than she did. She is an Israeli citizen through birth and she had a longer process to prove that.

They starting “living” together after a month, but it wasn’t officially moving in as they lived on the same floor in university dorms. They technically had separate rooms, but spent all their time together anyways.

Her Advice for Intercultural Relationships

For advice about dating someone from a different culture/language, intercultural relationships, she writes: “Do it. It’s way more interesting and eye-opening than dating someone from the same place as you. Dating someone from a different country makes the little things like where to eat and what to watch a whole conversation that you probably wouldn’t have otherwise. For example, I once spent a whole evening showing my boyfriend my favorite classic rock playlist and it’s so exciting to see someone hear your favorite things for the very first time. Whereas if I dated someone from the states they would be like “cool I’ve heard this already” and you might miss out and sharing that “first-time” excitement.”

Be sure to follow along on her adventures through her Instagram and through her soon to launch blog!

This next story is about two individuals who both speak French, but different types of French. The writer, is from Quebec and her boyfriend was from France. She writes that they met in university in Quebec and the intercultural relationship only lasted 3 years.

They both knew French, but there are some language differences between France and Quebec such as some words or phrases and slang or cuss words. Another cultural difference she saw was that “for French it is considered rude not to give kisses on both cheeks when saying hi to someone, as here in Quebec it is something we do mainly with family, we also give hugs or just wave Hi. It really depends on how well we know the people.”

Another difference was “Little things like the time people eat, usually in France you have what they call “apéro” around 5, then you eat diner around 8. Here in Quebec, most people eat around 6-7. Bar closes earlier here in Quebec too, that was a culture shock for him.”

Even though they both speak French, they grew up watching different types of things and like others write, they had to explain cultural references: “we didn’t grew up watching all the same TV shows, we both had the most popular one like Pokemon, but the “local” TV shows were obviously different. A lot of French artists are not known here, and same thing goes for Quebec artists that are not known on France.”

Her Advice for Intercultural Relationships

A big advice, she writes, “Communication is key. Most of the time we could see we were both confused about what the other was saying because it did not make sense, we would stop and just ask the other person what this word means for them, most of the time we didn’t have the same definition.”

At the end, “be open minded and open to discuss the differences!”

This collaborator chooses to remain anonymous. However, if you have any further questions about French and Quebecois, please let me know!

My next contributor gives us a male perspective. Out of all my contributors, only one man volunteered to share their story. Thank you!

He met his girlfriend through a common friend when he went to New York City to visit this friend. She was living in New York City at the time while he was living on the Ivory Coast. However, she was originally from North Carolina and he from France.

They mainly speak English with each other, but their native languages are French for him and English and Spanish for her. She is on the way to learning French while he also has learned Spanish so they rotate between the languages when possible.

Her Advice on Intercultural Relationships

In regards to raising children, they have decided that each parent will speak their native language to the child(ren).

He writes that the only cultural difference he has seen is in the way they communicate in which it is HE who works on his communication skills.

From a side note, as the blog owner, I find this a bit one sided. Work needs to be done on both sides to make an effective relationship.

Since they both live in her native country, he had to find a job with a visa sponsorship. After 9 months since meeting, they moved in together.

The last thing he mentions is the best is to be “adaptable, flexible, and communicative.”

This next contributor also was straight to the point in her contribution, but it still offers some insight!

She met her boyfriend at a bar. She is originally from France and he is from Australia. They now live together after 6 months via a Partner Visa.

They mainly speak English to each other since he doesn’t speak French. Her Spanish level is pretty low and believes there is a connection between language and culture.

She will balance English and French to her children and has found her relationship can be hard sometimes, but overall it is great.

The biggest culture difference are the attitudes towards life and food. She loves fine food as a French person.

Her advice is to work through any differences with open communication and be ready to do compromises.