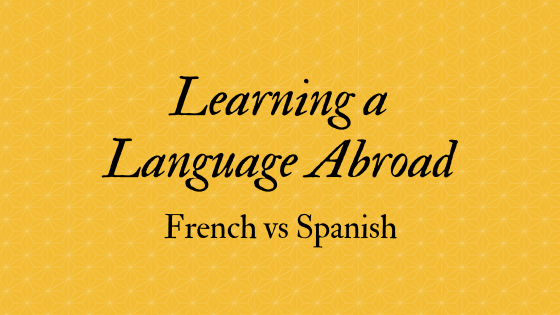 I started learning my second language in high school. It was an hour a day and most of it was in English.

I then went to Sevilla, Spain for a month to take language classes. This taught me a lot, but more about myself since I was 16.

This experienced taught me that, at least for me, to learn a language, one needs to be immersed.

For a time, I also dated a man from Spain, which helped my language skills, but also my slang vocabulary.

Taking this experience, I applied it to my French learning.

And if number 3 happened, date a French speaker, I would be happy with that (haha).

After my time in Europe and dealing with tourist visas in Asia, I wanted a place that was visa-free. This gave me one option- Montreal/Quebec.

I picked Montreal specifically due to its vibrant life. Please see more in my other blogs about food and activities.

I managed to find jobs in English, which disappointed me a bit because I wanted to practice my French more.

I also decided to start dating. Please see my post on that.

I found a few French speakers I could practice with, but managed to find one particular one.

Through combination of three French classes (levels 1 and 2, 3, and 5) and him, I’ve been able to get to a very conversational French level.

It helps that French and Spanish are similar and there are a lot of French words in English. However, because they are all similar, I confuse the languages in my head.

Grammar is similar, but not exact. Pronunciation is no where close to similar. If anything, it is similar to English in the sense you don’t pronounce every letter. And, as stated earlier, vocabulary crosses both Spanish and English.

I have often found I know quite a lot of vocabulary once I see or hear the word in French due to its similarities between Spanish and English. The tricky part is remembering the word so I can use it later.

You can probably imagine why I am having so much trouble haha.

My new challenge: learning to separate them and be able to switch quickly.

The similar things between learning French and Spanish have been:

1. Classes of that language
2. Living in a place that speaks it
3. Being with someone who speaks it from birth (host family/significant other)

The one difference with Montreal, though, is that there is a fair amount of English. I do believe my French would be far better if I worked in French as well and if the servers at restaurants and stores didn’t speak English. Because, once they hear my accent, they switch- to supposedly make it easier for me. Which I understand, but its frustrating. They also want to practice their English, which is also understandable.

Another curious thing I have also realized while learning French vs learning Spanish is that I am learning French to live and to, more or less, survive. I have picked Montreal as my home (for now) and would like to work in French.

With Spanish, I have lived in places that spoke Spanish, but I knew it was temporary. I only had a tourist visa or a student visa and knew I was going to be leaving. I was learning Spanish on my own initiative.

Do you need French?

As I mentioned, I don’t need French to SURVIVE in Montreal since English is everywhere, but it does make life easier having it. Regardless, I wouldn’t be learning French if I didn’t choose Montreal. If I picked Italy or Cambodia instead, I might be studying their respective native languages.

Versus, with Spanish, I specifically searched out places and people that spoke Spanish to learn and practice.

At the end, I would be lying to you if I said that I love French equally to Spanish. Spanish will always be first in my heart, but I do like French. I guess it goes back to that old saying- you never forget your first love.

I wish you luck in your language learning! If you cant live in a place for a time to learn the language here are some other tips:

5 thoughts on “Learning a Language Abroad: French vs Spanish”