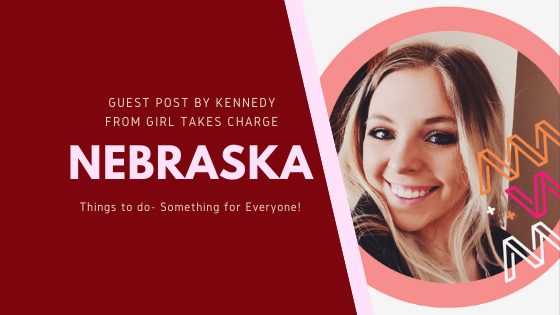 *I am so excited to introduce Kennedy to My Open Passport. Nebraska is one of the few states I have yet to go to in the United States. She was generous enough to write a post about the things to do in Nebraska! This post was written by Kennedy from Girltakescharge.com. She is a lifestyle blogger and Nebraska native

Nebraska lies in the heart of the midwest and is mostly known for its agriculture, flat plains, and college football. It’s easily overlooked with many people asking, “Where?” when you tell them you’re from there.

However, Nebraska is anything but boring with plenty of things to do in Nebraska and see. In fact, all types of people will be able to find something they enjoy.

The state motto may be, “It’s not for everyone”, but there is at least something for everyone here in the heartland.

For the City Slickers things to do in Nebraska

Love the hustle and bustle of a big city? You won’t want to miss these first four activities.

Omaha is the largest city in Nebraska and is home to the world renowned Henry Doorly Zoo. While there are other things to do in Nebraska also Locals and visitors alike can be seen strolling through this beautiful animal kingdom. Get transported to the dessert, rainforest, African plains, and more as there is so much to see here.

2. Spend a weekend in Lincoln, Nebraska

College football is a large part of Nebraska culture and visiting Lincoln is a must during football season. Watch the Cornhuskers play at Memorial Stadium, or head down to the Haymarket to catch the game at the Railyard. Either way, you will be amazed at the sea of red that flows through the city on a Saturday.

And on Sunday morning you can catch some brunch and take a stroll through the University of Nebraska campus.

If you’re hoping to catch some fun things to do in Nebraska, go shopping while you’re visiting, be sure to hit the Nebraska Outlet Crossing malls. They have great options from designer brands, sporting goods, and home decor items. Plus, there’s a great selection of restaurants too for when you’ve shopped up an appetite. Right off the interstate in Gretna you can’t miss this modern shopping center.

Other things to do in Nebraska is the sporting event that takes place in Nebraska in the College World Series. Omaha is taken over by college baseball teams and sports fans from all over the country. Catch a game at the TD Ameritrade Park and spend the rest of your night in the beer gardens drinking rum buckets and dancing to live music.

For the Nature Lovers

If you’re hoping to slow down and explore the great outdoors in Nebraska, check out these next spots.

One of the most breathtaking state parks in Nebraska is Fort Robinson State Park. There is a wide array of activities to choose from during your stay here including horseback riding, coneing, hiking and more. Plus, there are a variety of lodging options from cabins to RV and tent camping.

Another historic landmark that lies in Western Nebraska is Chimney Rock. It’s one of the most recognisable landmarks for pioneer travelers venturing west. It’s a must see whether you’re visiting Nebraska for a while or just passing through. Be sure to make a pit stop to see this breathtaking rock.

If you want to catch an amazing phenomenon, be sure to come to central nebraska from late February to early April. Over 600,000 Sandhill Cranes migrate on the platte river to fuel up before completing the northwind migration.

If you want the best look at these beautiful birds, consider booking your experience through Rowe Sanctuary. They offer guided tours, family options, and you can even book an overnight blind to catch the best look and take amazing photos.

8. Tanking Down the Niobrara River

You may have seen people canoe down large rivers or hop in intertubes, but Nebraska has their own way of doing things. Tanking. It’s one of the most popular summer activities.

Groups of people hop in cattle troughs and float down the river. The Niobrara is a breathtaking river with waterfalls and amazing scenery. You can book a tour to float down the river, or if you know any locals you can hop in with them in just about any river in the state. They will know designated areas to do. Be sure to wear sunscreen, Nebraska summers are hot!

For the History Buffs

Nebraska has a rich history, and you’ll love these places to learn all about it!

This place is not extremely historic, but is a fun place to stop if you like taking quirky pit stops and scenic routes. Monowi, Nebraska has an astonishing population of one, 85 year old Elsie Eiler.

She is the town’s mayor, treasurer, and everything in between. If you’re passing through, be sure to stop at her local restaurant, Monowi’s Tavern to eat a burger and drink some beer.

You can learn more about Monowi and Elsie, here.

The Strategic Air Command & Aerospace Museum (SAC) is one of the most interesting places to spend an afternoon and things to do in Nebraska. Learn about the history of Strategic Air Command and the Cold War as well as see some amazing artifacts. It’s a great place for kids too as there are many hands-on, immersive activities.

Learn about prehistoric times at the Ashfall Fossil Beds also counts among the things to do in Nebraska. See amazing fossils and have fun with tons of immersive activities. Learn all about ancient wildlife such as American rhinos and ancestral horses. Plus, there are long hiking trails to get outside and explore the amazing land surrounding the state park.

12. Stuhr Museum of the Prairie Pioneer

Life on the prairie is a major part of Nebraska’s history and Stuhr Museum takes you back in time to experience exactly what it was like. See sod homes, old farmhouses, or visit authentic mercantiles, blacksmiths, and more. The museum employees dress in traditional prairie clothes and are extremely knowledgeable of Nebraska’s history and what life was like when settlers first arrived.

Convinced to come visit Nebraska yet? There is plenty to discover and something for everyone in this beautiful heartland state!

Anything we missed? Let us know in the comments below and be sure to share this with your friends so they can visit and know the things to do in Nebraska too!

Be sure to check out more posts from Kennedy at girltakescharge.com and follow Girl Takes Charge on Pinterest!

Looking for something to pin for later?