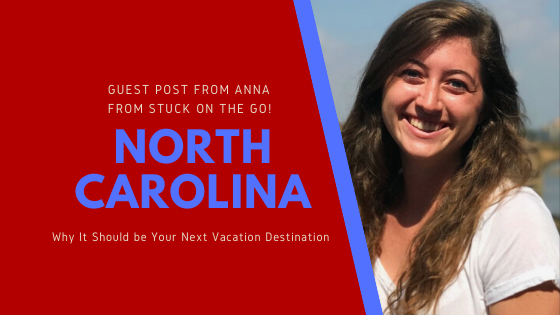 I’m so excited to introduce Anna from Stuck on the Go travel blog! I wrote a guest piece for her, check it out here, and in return, she wrote one for My Open Passport! It is exciting to have people from all over the world connect through social media to share the love for travel!

I’m especially excited as this post will delve into a state that I am not very familiar with- North Carolina! I hope it intrigues you as much as it did me and it will give you all the reasons to visit North Carolina!

Anna from Stuck on the Go:

Many people think it’s strange that I would love nothing more than to live in this same area until the end of my days. While I do have a severe case of wanderlust, North Carolina will always be home. And I’ll share with you exactly why.

The Appalachian Mountains dominate the border of North Carolina and Tennessee and gives very good reasons to visit North Carolina. The most well-known sub-ranges in my state are the Great Smoky Mountains and the Blue Ridge Mountains. These bring tourists from all over the country, especially for the Blue Ridge Parkway.

Not only are the views breathtaking, but the towns hiding in these mountains deserve equal attention. Asheville is one that isn’t so hidden anymore and with Appalachian State’s football success, Boone is an up-and-coming spot. Others that you should know about are Cherokee, Huntersville, Brevard, Blowing Rock, and West Jefferson.

Some of the most incredible beaches are along the NC Outerbanks also adds up to the reasons to visit North Carolina. This is one area of North Carolina that I hope to explore more in the future as I’ve spent the least amount of time in this section of the state. Each town dotting these barrier islands has its own unique character.

Even in peak summer times you can venture out to the sand and not be packed in like sardines when you lay your towel out. The beach isn’t all these locations have to offer though. These islands are full of history including England’s first settlement (Roanoke island) and Blackbeard’s reign of terror up and down the Carolina Coast.

We’ve got the best of both worlds in the Piedmont. I can be in the mountains in one hour and to the beach in about four hours. The area itself has a lot to offer though. The big cities of NC like Charlotte, Raleigh, and Greensboro are here. We’ve got an abundance of rivers and lakes. Multiple wineries, but more on that later.

The piedmont features many towns that were built by the tobacco industry and are now being revitalized. Winston-Salem and Durham being two that come to mind immediately. While visiting, be sure to get outside and enjoy the outdoors at state parks like Pilot Mountain, Hanging Rock, and Stone Mountain.

One of the reasons to visit North Carolina is the Wine. The awards just keep rolling in for the Yadkin Valley. It was designated as North Carolina’s first American Viticulture Area and there are just under 40 wineries in the region. A native grape to NC is the Scuppernong which is a type of muscadine. The Yadkin Valley produces many different types of wine, but muscadine is the most common. If you’re a wine lover you NEED to visit.

I didn’t know how big BBQ was in North Carolina until I started traveling. When I said I was from NC people would say “oh you have really good BBQ don’t you?” It took me by surprise the first few times but then I started thinking maybe I just took it for granted that we have great barbecue. And sure enough Lexington Sauce wasn’t named the same as the town just by coincidence.

If you’ve never known the joy of seeing the Hot Now sign lit up then you aren’t really living. Krispy Kreme was founded in Winston-Salem and I had no idea that there were any other kinds of doughnuts until high school. Known for their original glazed, when you catch them hot off the conveyor the fluffy inside with the just-crisp, glazed outside literally melts when it touches your tongue.

Ever heard the names Dale Earnhardt or Richard Petty? Both North Carolinians that made NASCAR what it is today. The sport got its start with moonshiners running white lightning on the backroads. At least that’s the rumor I’ve heard.

The rivalry of Duke vs. UNC basketball is known all over the US. They are both consistently ranked teams and kids everywhere dream of playing for these teams one day. There’s also Wake Forest and NC State who have been solid contenders in the past.

Take a Slow Down

You have no idea how many times I’ve gotten behind a vehicle on the road that’s stopped beside another one headed the other direction so the two drivers can talk. Between talkative drivers, tractors,  and tobacco wagons, I wouldn’t get in too big of a hurry trying to get somewhere.

Why do you think there are so many rocking chairs on front porches? Instead of rushing off from one thing to the next, sit and stay a while. My family still has Sunday lunch together after church. Many times family friends will also come and share the afternoon of good food and memories.

While this may be more of a general Southern thing instead of dedicated to North Carolina I think it’s still pretty unique. In a world that prizes being so fast paced it’s refreshing to slow down a minute.

It’s all synonymous here. City life may be a little different, but in most places if you don’t already live beside friends or family then your neighbors typically become quick friends. Sometimes they turn into the family you didn’t know you needed.

It’s not limited to people you share a property line with either. Anyone you meet on the street or in your local coffee shops are typically friendly and easy to talk to. I’m not even a people person or good at small talk and I’ll end up talking to the cashier at the grocery store for five minutes after they rang me up.

I’m Anna, a small town girl from North Carolina who loves to find new adventures & experiences.  My love of travel started in college & after I graduated, I took a five-week trip across Europe. Now my travels are typically long weekends because of my 9-5, but I make the most out of my 15 vacation days! I love to stay active while traveling and my favorite things to do are hike, fish, snorkel, sight-see, & find the best places to eat and drink!

Make sure to share on your own social media!