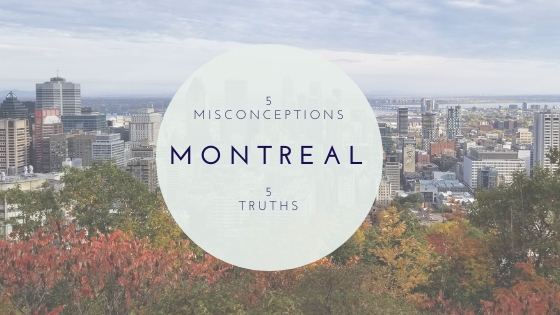 5 Misconceptions on Life in Montreal

1. Life in Montreal is all French Quebec

Life in Montreal is very different than the rest of Quebec. It is very diverse with cultures and languages. As much as the language police try, there are many businesses that don’t speak french. And if they do, it might not be Quebecois. There is a big influx of French from France. In certain areas of course, you hear more French than Quebecois. And in certain certain areas, you might not hear English or French/Quebecois.

2. Life in Montreal is about Poutine

Montreal is very diverse. Yes, poutine is everywhere, but so is a lot of other foods. You can find Chinese, Indian, Filipino, Mexican, and more on this island. Yes! It is an island.

3. No One Speaks English

Is life in Montreal only in French? In fact, quite a lot of people speak English fluently either as native Quebecois or expats. Its very difficult in Montreal to not find someone who speaks English. And it is not difficult to find jobs if you don’t speak French. Depending on your particular field or career, maybe, but there will be a job.

Life in Montreal is in fact, not just about winter. Though this seems pretty true when it actually is winter. Montreal has a marvelous summer. It is not the North Pole nor is it Alaska. During the height of winter, the sun rises around 7.30 and sets around 4. Not like the 24 hour of sunless countryside in Alaska.

Many French people who have never been to Montreal or even North America think Quebec is another France. They speak the same language, (with a “funny accent”) so of course its the same! After severe culture shock many accept it is in fact different. Cheek kisses aren’t really a thing and people are a lot less formal. For people not French coming to visit, yes Quebec is like Europe, a small piece in the middle of North America, but it isn’t Europe.

5 Truths on Life in Montreal

Winter starts end of October. First snowfall can be early November. It often goes through April with spring being one month in May. It is long, but luckily, Montreal offers many activities to get people through the cold. There is skiing, skating, music festivals, winter festivals, all the different speak-easy’s, all in the actual city limits of Montreal. One of the classic events as well is in March time frame called Sugar Shacks- eat so much food covered in maple syrup!

2. Summer is the Highlight of Life in Montreal

Tourists seem to come in the summer because its not snowy and cold, but in fact, there is so much to do that only locals can appreciate. Such as terasses, walks on Mount Royal, a variety of festivals that include Jazz, Comedy, and Acrobatics. There is also a lot of camping and bike trips that can be had as day trips around Montreal.

In terms of salaries and wages, rent and food prices are relatively cheap. You can live a pretty decent life in Montreal without breaking the bank. Of course there is always the expensive areas and the super cheap areas, but in general, most people can afford food and housing without batting an eyelash. Most Canadians from Vancouver and Toronto are a bit jealous by this.

Montreal has some of the world’s finest universities. People from all over come to get an education. On top of this, because of the openness and acceptances of the city, a lot of young people come to Montreal because they feel like they can be themselves without being judge.

5. Montreal is an Island

Montreal is in fact an island. It doesn’t appear that way because it is so big, but you need to cross bridges to enter and leave.