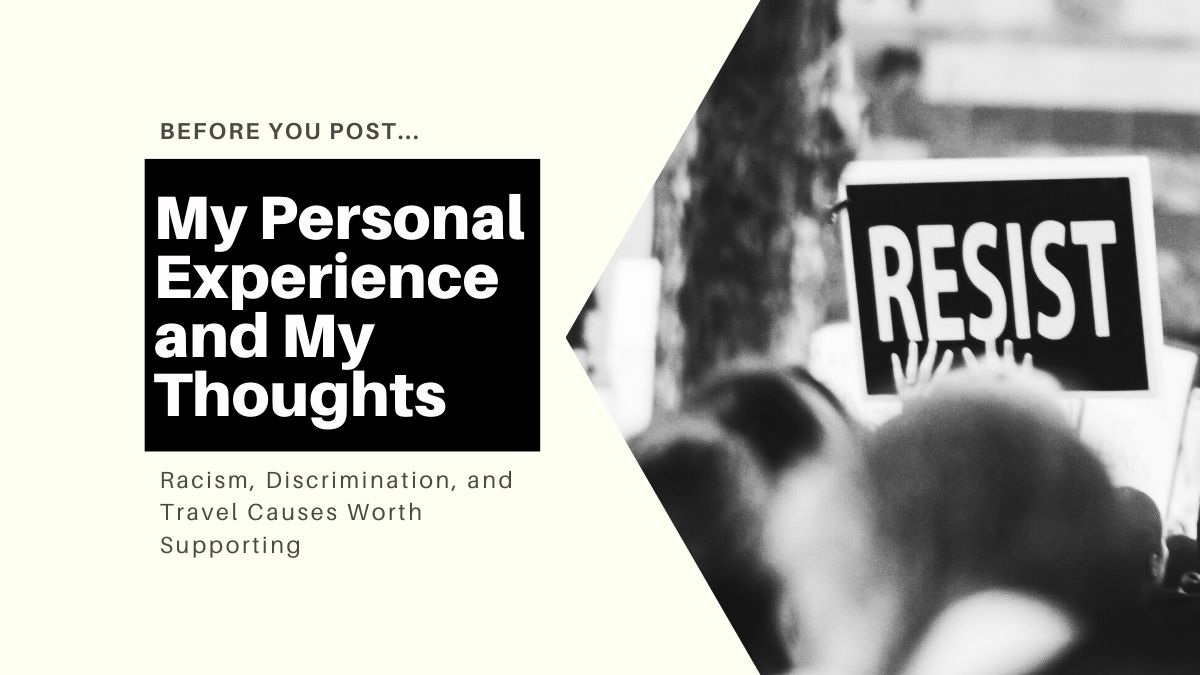 I am not physically white. When people look at me, they do not think I have any European ancestry.

They are wrong, but that is besides the point.

People just need to know why I look like I do in order to put a label on me.

There is a lot going on right now all over the world in regards to racism. Black Lives Matter.

This is true. Black Lives do Matter. So do Asian Lives. So do Hispanic Lives. And even, White Lives.

I recently watched a video of a Black woman who has been to all 195 recognized countries in the world. I am extremely happy for her and jealous that I am not even half of that number. All the experiences she has lived through and places she has been, incredible.

However, she stated that the most racist country she has experienced is the United States.

However, I need to share my experience and highlight some of what she said.

My Personal Experience with Travel Causes

For me, the most racist country I have been to was China. Fortunately for me, I was not the aim of this racism as I look Asian.

Places I have personally experienced the MOST racism has been in Europe, Canada, and the Philippines, from my own family.

One moment: There is some form of discrimination everywhere. I have witnessed it in all the countries I have been to.

In China, they would stop white people or black people in the street to take a photo. They would reach up and touch black people’s hair without consent. They use derogatory remarks about black individuals in daily conversation. Not just a small minority or once and awhile- but all the time.

This woman in the video, did not mention this at all. In fact, she says that these people are “curious.” They have never seen anyone like her.

That is a fair statement.

However, you cannot not be upset about this treatment and at the same time, be angry when people in the United States ask you the same thing, for example, how do you wash your hair?

She mentions that she has been asked how she affords to travel. I too have been asked this question.

But unlike the woman, I choose to view it as a CURIOSITY question rather than a racial one because, it is proven that in Western world, specifically the United States, there is a spending problem. People spend more than save. So, saving money is a awe inspiring thing no matter your race.

To me, this is one and the same.

In most of Asia, the people love and treasure those with lighter skin. This goes back to farming. Those who are darker are profiled as farmers and, therefore, poorer. Those with lighter skin means that they work in an office or don’t work at all, which signals them as rich. Therefore, the whiter the person means the richer they are.

In the Western World, this is the opposite. Those who are tan and darker skin means they are rich because they have the time to go golfing, to sit on the beach, or to afford a tanning salon. Versus, someone who is white means they HAVE to work and be indoors all the time.

“What happened to you? You got dark!” She was implying I was no longer the beautiful woman that she first said I was two months prior.

Even her sister, who I found had beautiful features, told me,

“I wish I was as beautiful as Beth because she is so white, and I am black.”

Trust me, she is way more beautiful than my cousin-in-law.

Here are a few things that I have received:

“You can’t be American.”

“So are you Latina or what?”

“You speak English really well.” (I am a native English speaker).

These are usually commented or asked within a few minutes of meeting me.

I was once told by a Spanish friend (from Barcelona) that people in Europe ask because they are curious and have not been around a lot of mixed people. (Cue the curiosity from the observation of the woman).

That is fine. I am happy to give a complete DNA background. I did 23andMe and if you have 20 minutes to spare, we can go through all my family tree.

Shall we start in the 1400’s when Spain conquered the Philippines and named it after King Philip? Should we go back even further to when the Philippines was mixed with the Chinese or Indonesians or Malaysians?

Maybe I can go over to the Spanish in Mexico and how they “allowed” Mexicans to go to the Philippines to build a new life.

Better, we can talk about the medieval ages in Europe when Italy was broken into many different kingdoms and had fights with each other? Or that Scottish and Irish were treated poorly by the English and then by the first Americans in the 1800’s?

My point is, there has always been discrimination and there is a lot in my DNA.

In regards to my observations:

I was at a pub crawl in Bulgaria. One of my hostel mates told me,

“Look there is another American.”

I asked him how he knew she was American, if he talked with her.

She ended up being American, but that is besides the point.

Do not mistake Europe for being less discriminatory than America. They simply hide it better and do not wish to discuss it.

Judge Me By My Character and Not On My Appearance

Martin Luther King: “I have a dream that my four children will one day live in a nation where they will not be judged by the color of their skin, but by the content of their character.”

Through this discovery, you will, I guarantee you, you will find out why I look like I do.

THEN, you can put your label on me and put me in whatever box you want.

But, wouldn’t it just be easier to judge me based on how kind of a person I am rather than my ancestors’ sex lives?

I am not saying America is perfect. There are a lot of issues that need to be addressed. Just like in any other country.

However, this woman, who grew up in America, needs to also acknowledge, just as I do, how privileged she is for being able to travel.

I would argue that she is more privileged than me because she has traveled so much.

She left Uganda when she was quite young. I was born in America. Both granted us a US passport.

I cannot speak for the people of Uganda, but from my own family experience in the Philippines, having an American passport grants me so many opportunities.

One of my cousins dislikes me specifically because I was born in the US and she was not. I do not hold this against her. I wish she has the same opportunities as me, but it is the lottery of birth. My mother went to America, her father, my uncle, did not.

The biggest racism I have experienced in the United States were from people who promote themselves as “woke” or “open-minded” or they were black or Hispanic.

I was told I could not join a group because I was “too white.” I was “whited out.” I was not “Asian enough.” I was also told that the discrimination and racism I have faced does not count because I am not black. But, I thought we were having an open discussion and acknowledgment of “hardships?”

Before we point fingers, before we criticize different nations and groups of people, perhaps we should look at our own actions.

Even if it is just “curiosity.”

Some Other Travel Related Causes

I end this article on some other travel related causes we can all support that really is affecting MANY MANY MANY lives and even damaging some animals as well.

Let’s talk about sex trafficking– people are enslaved from Asia or Eastern Europe and sold abroad to be sex slaves or prostitutes. Many arrive in North America. Did you know, it was just until recently that Canada had a “sex industry” visa, which, in effect, encouraged sex trafficking?

Dive into child sex tourism– where Western men go to places like the Philippines to abuse children sexually.

Jump into discussing about child slave labor from “woke” companies like Nike.

Interested in animal “sanctuaries” like in Thailand and other places? These places are abusing elephants or lions or tigers or disturbing wildlife in the Philippines by feeding sharks for the tourists snorkeling.

Oh, these make you uncomfortable? I thought that was the point?

Before you start your online activism, before you start posting little black squares, Research, learn, calm your mind- that is when we can start solving these issues. DO rather than just post.

And unlike others, I don’t care your exact actions. Just stop talking and start doing- whatever you believe is correct, right, and just.