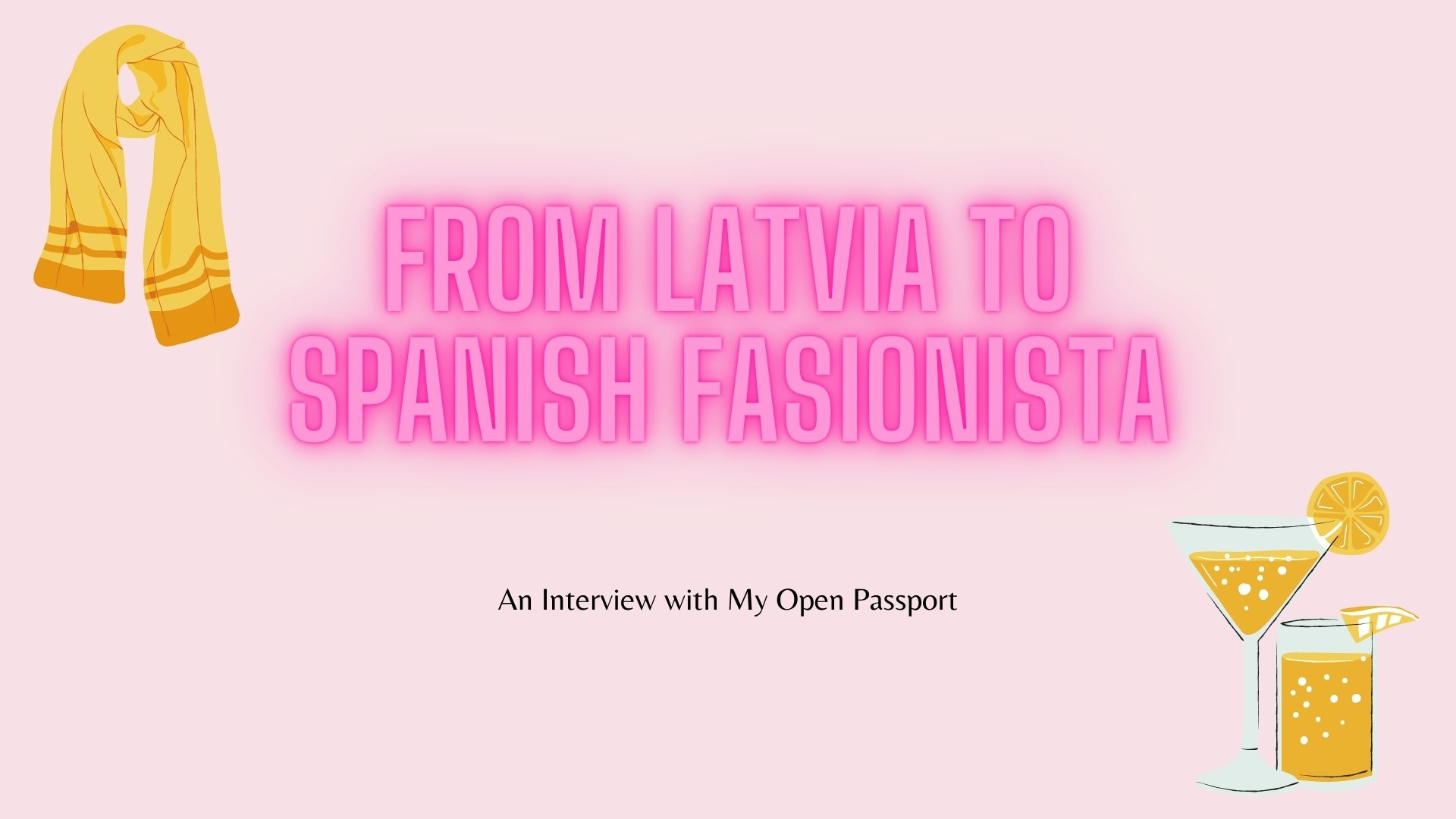 I have had the privilege of interviewing two wonderful women. You can see the one in this post, and the other in this post.

I worked with them on a volunteer writing team for a travel group. The travel group company changed and we ended up discontinuing with them, but remained in touch.

Both of these women are incredible and I can’t wait to share their story with you.

This article contains links to the interviewee’s website and socials as well as a link to a eCourse created by me!

Kristin is originally from Latvia, but currently lives in Spain. When I asked her how she managed to go to Spain she told me the main reason was love.

Her boyfriend, at the time of the interview, was living in Latvia, where they met. He is originally Spanish and she studied Spanish in school so communicating was easy. She visited him in Spain when he returned and fell in love with the weather, culture, and of course, the language.

In France she mentions how it is a big democracy and the culture of equality. She gives the example of when living in student housing in France, the shower room was for both men and women and she was definitely not used to that.

When she moved to Spain, she was expecting the same as France, but it wasn’t. It was still separate by gender.

One of her big culture shocks was the culture of smoking. She finds Latvians are a bit more “respectful.” They will tend to move away from you when they smoke while in Spain or France they will smoke right next to you.

A celebration difference can be seen for Women’s Day, 8th of March. In Latvia, it is like Mother’s Day. Women get flowers and breakfast in bed.

She said, in Spain, it is more protest and really showcasing the 3rd wave of feminism with burning bras, etc.

For her, there are two different types of feminism between Latvia and Spain. In Latvia she says it is a bit more soft and gentle versus, for her, she found in Spain it is more harsh and in your face.

One of my main interests is finding out how many languages people speak especially when they hail from Eastern Europe, she says “small country, we learn a lot of languages.” They are amazing linguistics and Kristin was no different. Her current languages are Latvian, English, Spanish, French and some Russian.

She started to learn English in 4th or 3rd grade, but now they start teaching it even earlier like in Kindergarden. Meanwhile, she learned Spanish and French in university, but she finds it wasn’t a great education in terms of achieving fluency. She really became fluent in these languages by living in the country that speaks it. She states that learning Spanish was easier than learning French, which I concur!

For French she states: “You write 10 letters, but you pronounce one.” Which is funny because it is pretty true.

But, on a day to day basis she mainly speaks Spanish and English. Her French is a bit rusty at this point, but she will hold on to it as her time studying abroad in France was very influential on her.

She told me that due to history between Latvia and Russia, Russian is pretty common, though she doesn’t like it.

She really likes how Spanish sounds, but finds English to be the easiest besides Latvian to speak. Though she studied Spanish, when she met her boyfriend, she was nervous speaking with him often.

I don’t know much about the Baltics, which is in the North, not to be confused with the Balkans, in the South, so I asked her if Latvian is a Slavic language, meaning, is the origin of the language tied with Russian. She told me not really. It is technically Baltic in the language tree, but there are similarities due to historical exchanges over the years. She says there are also these historical exchanges with German.

One of my biggest curiosities are multilingual couples. I always ask couples from different native languages how they communicate and how they find the language differences or barriers.

She told me she agreed with me that if really helps if both partners know the other’s native language.

The most important part, for her, is not the language, but his love and interest for her culture and country. She loves how he is always asking about her country and wanting to visit.

We also discussed how Spanish, French, and Americans tend to not learn more languages because we are comfortable since so many people speak our language.

Her biggest advice is to be open-minded.

She told me she noticed a lot of people are scared of change and going outside the comfort zone, but she said the biggest help for her to do this is to look at the positive of a situation.

She has had culture shock of course, but she tries not to take it personally and look at it positively. You have to accept what the other country and culture is about. You can’t change it.

What can help is researching and gathering information. Her boyfriend definitely helped with her move to Spain, but if you are coming totally alone, she really emphasizes to be prepared for anything: “get contacts from the Embassy.”

Look at different situations and plan your exit plan or how you will handle it.

One of her other pieces of advice is to learn a few pieces of the languages. Just saying “hello” in that language is a big step. Learn some basic phrases and words to help you maneuver around and earn the respect of local people.

Her interest in fashion started when she was a small girl. After school she would go see her mom in the city center and explore the shops.

She started her fashion journey with make-up, but then found out that she doesn’t really make-up and moved on to handbags and shoes.

She has a hard time choosing one niche and she finds that fashion can be spread into different niches: travel, camping, fitness, etc.

Her first advice is to understand your niche, even if it is broad. Really find out what you love to do. What is your passion?

Next, who are you helping? This will help you find out what to write.

Her next advice is to buy the domain right away, for your website. This helps out with SEO since it is more professional. If you are interested in starting your own business or blog and not sure where to start, be sure to check out this online business eCourse: Build a Business!

Her last advice is that you will learn along the way, you don’t have to be perfect from the start. You will always keep learning.

In a way, this goes into her expat advice: be open-minded and keep a positive attitude.

Her last advice: “Whatever you do, don’t do it for money.”

She said, she had a hard time with money in the beginning, but she was so happy because she was doing what she loved. Don’t do blogging for money. Do it because you love it. THEN, how it can bring you money.