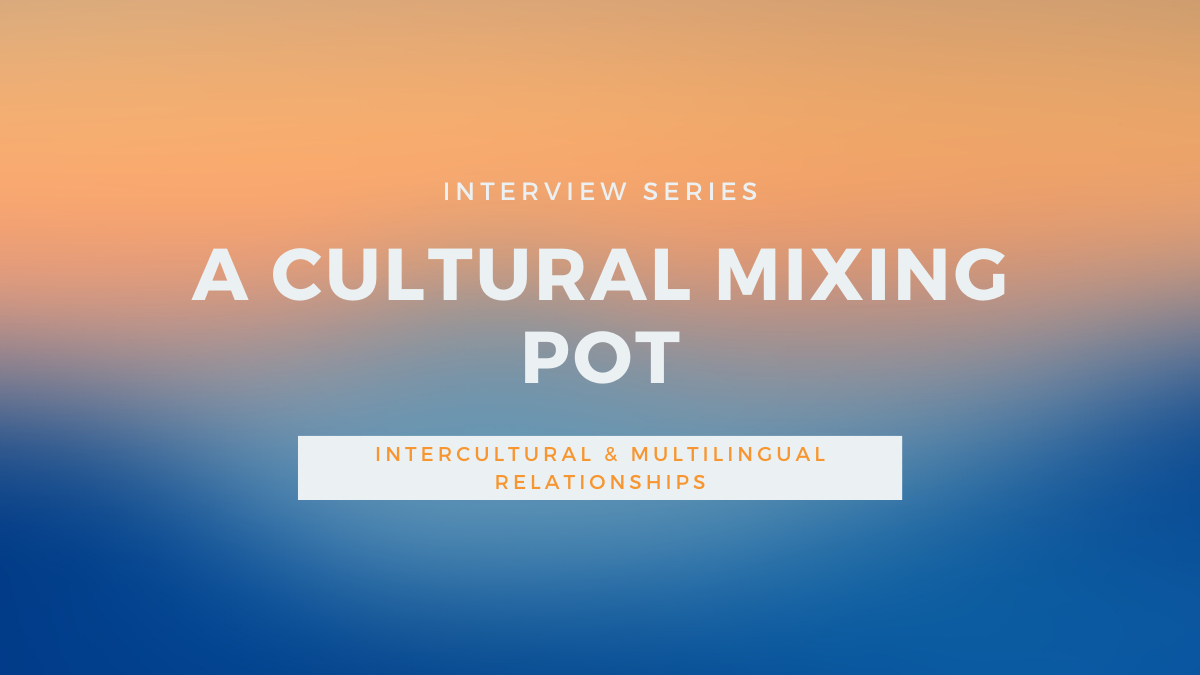 She met her now husband in Spain when both were there studying for a Masters degree. He is originally from Mexico City and she is from California.

One difference she found in their dating styles was that they kissed one night and he thought it meant they were exclusive while she, coming from a more liberal background of the United States, wasn’t sure they would see each other again.

Years later, they moved in together in San Francisco before getting married and another cultural difference showed when his parents came to visit. Her now mother in law said her house was beautiful, but “too bad it is not blessed by God.”

His native language is Spanish and hers is English, but after 17 years together her Spanish is pretty good, but she hesitates to say she is fluent because she is always learning. She says that because when they first started dating, his English was better than her Spanish so their relationship is mainly in English.

When they lived in the United States, her husband spoke Spanish to the kids, but because they only heard their dad, they never spoke Spanish back because she would speak English. However, they moved to Mexico and after 6 months to a year, her kids became completely bilingual.

In regards to their relationship, she states “I’d say we act like a typical married couple. Hahaha.”

Now, for cultural differences in the relationship and with raising kids, she found that there are differences in how strict parents should be or are with their children, how long a dinner party or a regular party should be, and how often one needs to hang out with the in-laws. There is also a matter of the division of chores.

To work through these differences, she says communicate and remember to understand the other person’s point of view.

Currently, everyone lives in Mexico City, but they have lived all over the place and have done several long distance periods. He is a diplomat so living in new places and intercultural communities is a bit easier through his status.

Just like another contributor, they pretty much started living together since day one since they met through university and were living in student housing. In total, after on and off again long distance and living together, they marred after 6 years of dating. They got engaged after 5 years.

Due to their cultural differences, they had two weddings. One in San Francisco and one in Mexico. During the ceremony in SF they also had the church readings in Spanish and English. The ceremony also had deep red color flowers and she wore a lace dress which were Spanish inspired.

She says that Spanish is a passionate language and so are the people and the biggest advice she has is to be open minded and to not sweat the small stuff.

Peace of Mind is Peace of Heart

This next contributor is unique in the way she is currently in a long distance relationship. Unlike the others, she is in a relationship that is completely intercultural and linguistically different.

She is from and lives in Jakarta, Indonesia and he lives and is from Oslo, Norway and they met “on a mind freedom and releasing retreat in the Netherlands.” As they both “active releasers and Sedona Method Facilitators” they didn’t talk much during the retreat, but kept a friendship for two years prior to dating.

Though, she speaks Indonesian natively and her partner speaks Norwegian, but they use English to communicate. They are trying to learn each other’s native language.

She writes that her “relationship is amazing, nurturing, and fulfilling. Like many relationships, we have our up and down, of course. But we support each other and respect each other’s point of views and allow the other one to grow to the best of of his/my ability.”

She continues by mentioned what cultural differences they have observed: “I’m from Asia and he’s from Europe. There are a lot of cultural differences. People in the West think the world is relatively linear, stable, mechanic, whereas people in the East think it’s always changing and organic. And he said Indonesians are always polite, we use our hearts more than our heads.”

She states that their personal way to work through these differences are: “Because both of us practice releasing, we respect each other and the differences are not the problem. We communicate a lot so it’s easy to change the things in our life that need to be changed from the place of love.”

She gives some big tips for others looking to date someone from a different culture and or language:

“Yes, let go of fantasy and the idea about how exciting it is, and instead of looking, allow that to unravel by itself. If you’re meant to date someone from a different culture, you will. When it happens, respect each other. Let go of wanting to be right and let go of wanting to control each other. Let go of wanting to force our beliefs because we think we know what’s best for them. If we identify with them, of course, we don’t want to hear what we’re going to say anyway. Compassion is understanding what the others are experiencing without sharing their misery and with a wish to promote its alleviation. Allow your partner to grow and allow yourself to grow together with him/her. When we fully love someone, we identify with them. We become one with them. And we allow them to be the way they are without any wanting to change them.”

She mentions that she doesn’t see any connection to language and culture, but as I am writing this, I wonder if it is because she doesn’t speak her partner’s native language? From those I have interviewed and my own personal experience, those who speak the other’s native language seem to agree that there is a tie. But, because she and him only speak English (both their second language), does this play a role? Thoughts to ponder!

She continues to mention that she has an ex from Jordan. It didn’t work because there were a lot of cultural differences. She was devastated when the relationship ended, but she continued to work on herself and let go of limiting beliefs around relationships. She states: “now I have the best relationships I could ever image.”

Feel free to connect with her on Instagram or her blog.

Our next contributor originates from China. But spent a lot of time in the United States before meeting her now husband. She originally came to the US through a student visa and then transitioned to a work sponsored visa. They met in an after work social event in New York city.

She starts off by saying there are some big cultural differences between China and the United States. In regards to dating, in the United States there is the idea of casual dating and taking things slow before exclusivity. In China, most dating starts from referrals meaning that someone gets introduced through family or a friend.

Her husband is from the United States and both live in New Jersey now. He speaks English and she speaks Chinese as native languages, but he does not speak Chinese and they communicate in English. He does, however, speak Spanish, but she doesn’t so the main language at home is English.

They have a child and, for the most part, they speak English to him, but she does teach her son a few Chinese words like the numbers and has bought him toys that sing and talk in Chinese.

In regards to raising their child, she comments that her husband grew up in the US school system where it and the parents give children plenty of assurances and praises to encourage them to be confident. She remarks that Asian parents tend to be more critical and strict. She recognizes that due to this upbringing, their parenting styles are different.

Through this, she states: “We are happily married. What we have in common is that love and respect and understanding for one another overcomes the intercultural barrier.”

Like our other contributors, she says that the key to intercultural communication is “we both need to understand the other person is acting out of good intention, so that we can navigate through our differences without taking it personally.”

They never moved in together before they married and were engaged after one year of dating. After 6 months of engagement, they got married.

Her advice for others about language differences are: “I think languages is how we express ourselves, but it cannot change who we are deep down. We need to be able to see through the surface (language) to connect at a deeper level, if we want a relationship or marriage to work out.”

From Brazil to Saudi Arabia

She spoke English prior to their relationship and after getting together, he lived in Brazil with her for a year picking up Portuguese. He speaks Arabic fluently and she is in the process of learning it. So in total their household speaks three languages.

Upon asking about her children, she said they all speak English and the family tries to speak Portuguese and Arabic together especially since they now live in an Arabic speaking country. She says she sees how language is tied to culture and vice versa.

One things she brings up is that their intercultural relationship is great mainly because he is able to communicate with her family with ease and her with his. However, since they were raised differently, raising their children has been an interesting task and can be tricky at times. But, as the age old saying is, the best to work through differences is to talk through them and decide which is the best for the overall family.

They currently live in a country that is neither one’s maternal country. Since her husband is studying in Saudi, he got a student visa and then sponsored the rest of the family to join him.

I was also curious about the timeline of their dating. They got engaged one year after dating and got married one year and six months from dating. They finally moved in together after 2 years of being together. There is a six month difference between marriage and moving in because of the paperwork involved with them living in two different countries at the time.

She writes “love moves boundaries,” which can definitely seen by their relationship! As they literally moved countries and cross borders.

You can read more about her and her life through her website.

Be sure to connect with me on social and or sign up for my monthly newsletter!