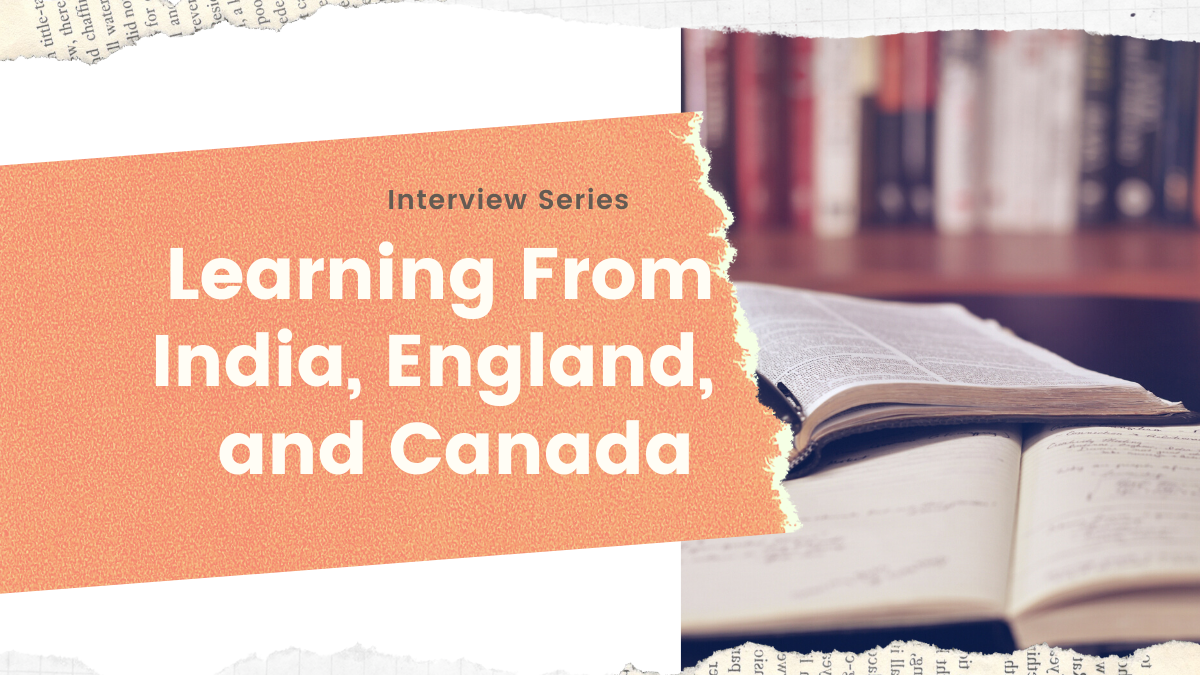 If the audio doesn’t work, check out YouTube to hear this Indian Expat’s interview!

Living In-Depth in 3 Countries as an Indian Expat

I had the pleasure of interviewing a friend of mine who has led an interesting international life as an Indian Expat!

Originally from Bombay, India, she identifies with being all over the world! She has spent most of her conscious youth in the United States (6 to 13 years old) and then moved for high school back to Bombay.

Her need to travel brought her to England for university and then on to Canada for graduate school. Within Canada she has lived on the West Coast on Vancouver Island and is now trying her hand in Montreal.

She shared with me what she has seen as cultural differences in regards to education from her Indian Expat perspective.

Out of the different countries she has studied in, she found England’s education system the best for her learning style. She mentioned that English education was more artistic and understanding the whole concept rather in North America it was more doing things now for that career path, it was less in the moment.

She shy-ed away from talking about India a lot as she likes the culture and identifies with the Western culture more. Though, she says her favorite food is Indian. Be sure to listen to the end of the audio for some delicious foods that she enjoys!

One thing she does say about India with love is that the country and culture is more spiritual and recommends the country for anyone looking for that spiritual connection.

She is also passionate about politics. Not in the sense of caring who gets elected, but more in how politics can influence society and individual people’s culture. She loves looking at British, Canadian, and American politics for this as the different leaders can sway the country.

Another Name for Culture Shock from an Indian Expat

One of her biggest points in our conversation was culture shock as an Indian Expat. Moving from a very wealthy country to a country full of poverty at a tender age of 13 was very difficult for her.

Her recommendation is to get counseling for this culture shock. She mentions it as “predeparture training” and “displacement” instead of culture shock.

Culture shock is a bit like a roller coaster which my friend mentions in our conversation.

There is the UP part that is the exciting part of being in a new place or returning home and then there is a bit of a plateau before falling. This FALL is known as that depressive part we might experience of homesickness or, as my friend mentions, realizing that you are so different yet everyone at home is the same.

I can understand why she calls this second phase displacement. I too have experienced this many times when I have returned home, please see my past post on A Nomad’s Return Home.

You do feel displaced as if you don’t belong. Things seem disjointed.

Though she mentions predeparture training as a semi-joke, it is always good to research the place you are going to for cultural norms and other advice from past travelers.

Picking a University and Country as an Indian Expat

I asked her how she picked what university and country she wanted to go to. Her biggest answer:

As an Indian citizen, Indian Expat, she has to jump through more hops than perhaps me from North America will have to do to move or study to another country.

After the paperwork, she looked at the programs offered in those countries. One big program she wanted to be a part of was environmental sustainability. This narrowed down her choices.

Further, how she picked England and Vancouver Island had to do with the weather since it was more moderate than Scandinavia countries in Northern Europe.

Either way, what is true about her path, paths don’t have to be straight, but windy.

Life in Montreal as an Indian Expat

She wasn’t sure if she could have handled the cold very well; however, after spending time in Canada, she realized she wasn’t going to die. After a few years, she missed Europe and decided Montreal gave her some Europe while still being in Canada.

At first wanted to learn French, but after seeing how easy it was to live without French in the city and how hard the language is, she has moved away from this goal.

For things to do in Montreal, she recommends all the summer festivals which involves art, food, and culture!

She also mentions there are so many lovely bars and cafes and there are different international foods available. She highly recommends cocktail pitchers!

Tips for Meeting People from an Indian Expat

It was funny talking with her about this as I found her advice very similar if not the same as to what I recommend!

Moving from place to place is hard on establishing friend groups especially when you don’t have a university or job to fall back upon for social interaction, but it is very much doable. In fact, I met her off Bumble BFF.

Usually people who are on these friend meeting apps or Meetup type apps are open to meeting and talking with new people, so don’t be afraid to try!