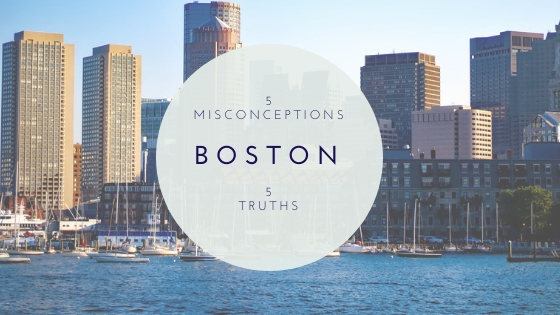 5 Misconceptions on Life in Boston

1. Everyone Has a Strong Accent

Life in Boston isn’t all about strong accent. Upon hearing that I have lived in Boston, everyone always asks why I haven’t picked up the Bostonian accent. Not everyone who is from Boston has a strong accent. I was not immersed in this accent like I would have been in England or Australia. There wasn’t really a way for me to pick it up. If you would like to hear what I am writing about, please see this YouTube or another YouTube video.

There is a perception of New England and of Boston specifically that many are from old rich families that have been there for years. This isn’t true. Life in Boston has many recent immigrants from all over the world. There are people whose families have lived their for generations, but do not live in big mansions. New England and Boston are just like any other place- there are some bougie and there are some not bougie and all in-between.

3. Everyone goes to Harvard, MIT, or BU

It has so many universities. It is has the most per capita. So, it is unfair to say all students go to one of these 3. But I can see how it is done. These 3 are well-known in media, but don’t be tricked!

Winters can…but they are also quite beautiful. The white calm after the first snowfall in the city. The countryside around city. It can be quite bad, but there are definitely worse places for winter.

5. It’s such a small area, people must travel around like Europe!

This is false. Though New England is a small area, I have met individuals who have grown up in Boston their whole life and hadn’t made a bus, car, or train trip to New York City, which is 4 hours away. For New Englanders, a 2 hour trip is very long. People tend to stay in a 2 hour area majority of the time.

5 Truths on Life in Boston

1. Life in Boston is centered around being young city

It might seem like an older establish city due to its history, but it is a very young city due to the universities. You often here about university towns that double in size during the school season. It isn’t necessarily that, but summers can be a bit quiet in local hang-outs as many students go home or elsewhere to enjoy the warm months. In the winter, it is packed with young people rushing around to bars or to cafes to study or to go shopping. It is very much a lively city.

2. Life in Boston is Sports is Everything

With such incredible sport teams: New England Patriots, the Celtics, the Bruins, and the Red Sox, how can Bostonians not love their sports? It also holds the international marathon- Boston Marathon, which has now, unfortunately, garnered more fame than just a running race.

Dunkin Donuts is a major aspect about life in Boston. It truly runs on Dunkin Donuts or it’s new branding, Dunkin’. When a major sport team from it won a game, they would give out free coffee. Dunkin’ shops are everywhere in the city. It definitely gives Starbucks some strong competition.

It is actually very diverse. From the beginning, there were sections of the city dedicated to certain ethnicity such as North End for Italians and South End (Southie) for the Irish. But, in this 21st century world, it has a mix of people from all over the world. One can hear a variety of languages in the T (subway system). It is not as obvious as Miami or New York, but it has it’s fair share of multi-cultural events.

It is not only proud of their sport teams, but also on their city and state. They love the city to death and for sure are #Bostonstrong. Bostonians know Boston isn’t a perfect city, but it draws people here every year- as tourists, as students, and as residents. There is just something about Boston.