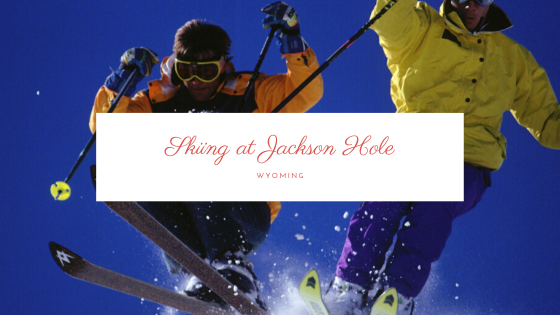 How we started skiing at Jackson Hole Wyoming? Started off the morning quite early as we were coming from Idaho Falls, which is about a 2 hour drive.

There were a few hiccups in that we had to get gas and had to turn around because my ski helmet was missing. Well, after searching the house and the car, it was decided that it was stolen when the car was broken into.

I ended up wearing a beanie the whole day, which was uncomfortable for me as I am used to wearing a helmet while skiing. Please wear helmets while skiing or snowboarding!!!

We arrived around 10 am.

My father and I both have the Ikon pass, which is an international ski pass that applies to different ski resorts around the world- but mainly in North America.

Skiing at Jackson Hole is one of the best skiing destinations.

Since the pass only grants us a few days at Jackson versus unlimited days at other places, we went to the ticket counter to make sure we were following procedure.

The woman said we didn’t have to do anything and go straight to the lift. Awesome!

Getting on the Lifts

Unlike Mont Tremblant, see past post, where they have to manually scan your Ikon/pass once at the base of the slopes, Jackson had automatic scanners at every chair lift, meaning the pass could be within your jacket, you don’t have to take it out or it doesn’t have to be on the outside.

Make sure your pass is in it’s own pocket near the middle of your body for the computer to read it properly. Don’t have it with a phone or camera, etc.

Skiing at Jackson Hole was a great experience but we only skied two hours, but as it was the first of the season for Dad and I am not the best skier, it was still nice.

Jackson Hole is stationed in the Teton Mountains. Teton, meaning boobs in French, were originally named by French trappers in the early years of United States’ history. Near here are two National Parks: Grand Tetons and Yellowstone.

The area itself is beautiful, but the slopes were amazing for skiing at Jackson Holes.

The morning was beautiful. Sun was shinning and there were no clouds.

After lunch, the weather turned. It got windy, no sun, and cloudy. It was hard seeing the snow as it just looked like a white blanket.

However, the majority of the snow was beautiful powder with little ice-y parts.

There were quite a few people seeing that it was the weekend right after New Year’s; however, the resort is so big that it didn’t feel like a lot. We didn’t have to wait too long for the chairlift nor did I feel like I was going to get run over on my way down.

There are slopes for everyone! Beginners, intermediates, advanced, and super advanced. No one will be bored for sure!

There are two parking lots.

The closest one to the slopes is paid if less than 3 people.

The second is further away and is free. There is a free shuttle bus from this parking lot to the slopes. However, sometimes people will swing by the far away lot to pick up passengers in order to get free parking at the closer one.

The village has a lot to offer, but on the slopes are different places to eat your own food or buy food. They also offer free water.

We ended up leaving because my dad wasn’t feeling well. This was my first time skiing at Jackson Hole, but I enjoyed it and I am looking forward to coming back!

This is one of the nicest ski resorts in North America and I highly recommend for anyone to come and try it.