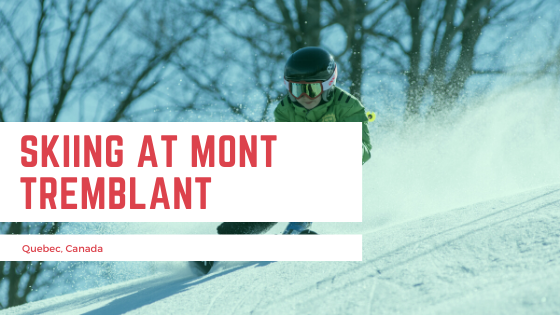 My friend, N, came up from Boston to go skiing at Mont Tremblant. He had the Ikon pass, which was perfect because I did as well.

The Ikon pass is an international ski pass that grants access to different ski resorts. The resorts are mainly in North America, but there are a few outside.

He picked me up around 8 and we went for skiing at Mont Tremblant around 10.

There are many parking lots. The closest to the village (South face) is paid, but the others are free and have a free shuttle. When we were there we managed to get the closest free parking spot, which is just a 5 minute walk from the slopes. The parking at the North face is free.

Mont Tremblant consists North and South face. At the South face there is a village at the base of the mountain. When skiing at Mont Tremblant, you can take a standing lift up to the base of the slopes. From here, skiers get on a gandola to the top of the summit. They will only scan your pass, manually, at the gandola and at the chairlift at the North face.

The rest of the chairlifts are walk-on’s.

All chairlifts and the gandola lead to this one summit.

However, it still is possible to get lost as I managed to do so twice!

When we first got to the summit, N went to look at the map, but I thought he had skied ahead. I followed where I thought he went, but ended up at a chairlift with him calling me asking me where I was. He was still at the top.

The second time, we were leaving and I forgot which side of the mountain we parked. I picked North and he went South. He waited patiently for me as I had to go back up to the summit then back to the South.

Mont Tremblant is about 2 hours north via car from Montreal. Though Quebec is pretty flat, skiing at Mont Tremblant offers decent mountain grades.

We left our ski bags at the customer service building at the very bottom. Nothing was in it except our shoes so we just put it in the corner somewhere. We also ate lunch there as well since I didn’t bring my food with me on the mountain and N didn’t pack any lunch.

The snow was a bit icy, but nothing too bad for East Coast skiing at Mont Tremblant. It was quite warm that day so the snow was fluffy.

It was cloudy, but the view was still amazing and since we went during the week, there wasn’t that many people.

However, near the end of the day the storm was blowing in and visibility was getting worse and worse by the second. When I went up to the summit that last time, I could barely see due to the snow blowing in.

There are not that many difficult terrains. Nothing too steep. I am intermediate, but I found all the slopes I went down very doable and easy, even the black diamonds.

There are other ski slopes in Quebec, but this one is the most famous and definitely worth a trip if you are around Montreal for ski season! I look forward to continue to ski here!