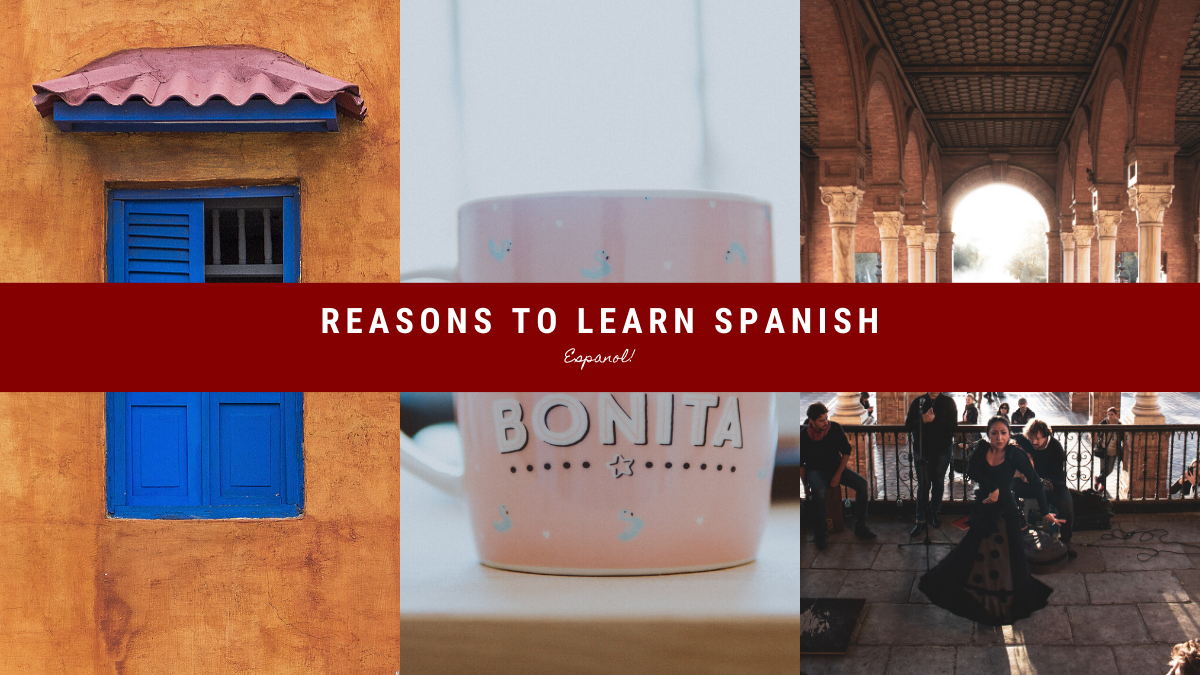 There are many reasons to learn Spanish today but when I was learning Spanish, more than 10 years ago now, there was a lot of surprise and questioning why I would do that. People were questioning me, but my father’s peers were questioning him too.

“Why are you pushing her to learn another language?”

“I just speak English, I am fine.”

“She doesn’t need to know more than English.”

“This is America, we speak English.”

In regards to the last point, actually, the United States of America doesn’t have an official LEGAL language. There is no law saying what the language of the country is. The only reason it is English is because of history with England, but also it is the world language currently, AND it is just the “standard.”

This might be an unpopular opinion, but I am sure that the “standard” language in the United States will eventually become Spanish this is one of the reasons to learn Spanish. Already in majority of the country there are signs in both Spanish and English and some locations there is only Spanish.

The United States is not like Canada in that their FEDERAL government has stated that their national languages are English and French, but even then, it is up to the provinces to actually enforce or state what their language is. For example, Quebec is just French. News Brunswick is the only province that also states they are bilingual. Technically, all government documents need to be in both languages; however, in British Columbia, residents will find it is mainly in just English.

I saw or write all of this to say that even if there was a FEDERAL and LEGAL rule about a language, doesn’t mean people follow it.

To leads me to the main point: Reasons to Learn Spanish! These can apply to other languages as well, but since Spanish will always be my first love, I am dedicating this post to just Spanish.

Do you know what the top 5 most spoken languages in the world? In regards to sheer speaking population, China and Mandarin reign number one. India and Hindi come in third due to population size as well. However, the number one language in regards to native speakers AS WELL AS non-native speakers is English. This shouldn’t come too much of a surprise since it is the language of business and tourism. The fourth, you guessed it, Spanish.

China and India might hold population, but Spanish holds the biggest number of countries that speak Spanish fluently. It takes up most of a continent.

Side note, if you speak each of these three- that is freaking awesome!

The fifth is Arabic, which is also not a surprise (to me).

Back to Spanish. I believe Spanish would out rank English if English was not the world language. Many people’s second or third language is Spanish. Take me for example, I learned Spanish, my second language.

Many of my European friends learned their native language, English, and then Spanish.

I do have a few friends that the only way we could communicate wasn’t because of English, but because of Spanish. So, even though there are many non-native speakers that speak English, there are also a lot for Spanish.

2. More or Less a Whole Continent Speaks It

Many people that live in Canada and the United States speak Spanish either natively/by heritage or having learned it as a second language. You have the majority of the Caribbean, Central America, and the majority of South America.

That is a lot of places! As a traveler, I really like learning a little about the language in that country I am in. I find that it helps traveling easier and the locals tend to be nicer if they see you are trying (especially in France).

However, knowing Spanish, it just opens up so many travel opportunities in Latin America as you can join tours in Spanish if the English one is full or they don’t offer your native language. You can speak more with locals. You can also know if and when you are being ripped off.

Hey, the gringo price is real.

And, let’s not mention Spain in Europe!

3. It’s a Gateway to other Romance Languages

Knowing Spanish has helped me significantly learn French. It has also helped me understand other romance languages when I was traveling: Romanian, Italian, and Portuguese.

I had a few conversations with Italians and Portuguese speakers where I was speaking Spanish and they were speaking their own language. These conversations weren’t about brain surgery or politics, but it was enough for us to get to know each other and to give directions.

Plus, I was able to read a bit of the other language while I am touring around, which helped in museums or restaurants.

Portugal was really amazing for me because they spoke Portuguese, Spanish, and English fluently. I believe they speak Spanish fluently because a lot of Spanish speakers just assume they speak it and don’t try to speak Portuguese or English. So, when I was there, I wasn’t sure what I should do. Try Portuguese? Speak Spanish? Speak English? A combination? I loved this dilemma!

I might be a bit bias, but I find Spanish speaking singers create some of the best music. There is the more popular genre, reggaeton. There are also traditional music from all the different Hispanic countries like Flamenco, Tango, Mariachi, Bacchata, etc. Many great dances come from a Spanish speaking country like Salsa. There are many people from all over the world that dance this colorful dance from Mexico.

On top of this, these Hispanic communities have really great food and drink from tacos to paella to Malbec wine to Empanadas, etc.

There is a lot of studies out there that state, the more languages you know, the smarter you are. It’s true! I’m not a scientist, but from the research out there, each language connects neurons in your brain, which allows more pathways for thought processing.

I feel like this section doesn’t need much further explanation than that.

What do you think? Do you agree with me? Are you pumped to learn Spanish? If you are, here are some great places to learn Spanish abroad, because why not learn and travel at the same time!